Introduction: C-reactive protein (CRP) is present in healthy individuals in low concentrations and is routinely determined as an indicator of systemic inflammatory reaction. However, clinical significance of the very low concentrations of CRP encouraged manufacturers to develop sensitive methods that allow CRP determination in a wide range from very low to high concentrations. Such approach is of extraordinary importance in the diagnosis and follow-up of infection in preterm infants and newborns because the onset of sepsis in these patients is characterized by unspecific symptoms and is diagnosed only on the basis of laboratory results.
Aim: Analytical assessment of a new combined Randox Full Range assay for determination of CRP concentration in comparison with Olympus reagents as reference reagents. The measuring range of the new reagent is 0.1-160.0 mg/L, which should be an advantage over Olympus reagents as they require two reagents and three applications for this measuring range.
Materials and methods: Analytical assessment comprised within-run imprecision, between-run imprecision, inaccuracy and comparative determinations of CRP concentration in patient samples. The examinations were performed in accordance with ECCLS recommendations on Olympus AU 640 instrument.
Results: Satisfactory results were obtained for analytical within-run imprecision (CV ≤ 2.18%), between-run imprecision (CV ≤ 1.64%) and inaccuracy (R ≤ 3.67%). Results of comparative determinations of CRP concentrations in patient samples using reagents by two manufacturers showed a high degree of correlation (r ≤ 0.993).
Conclusion: Based on the obtained results, we may conclude that the Randox Full Range assay is a sensitive and reproducible reagent for determination of CRP concentration.

C-reactive protein (CRP) is an acute phase reactant present in healthy individuals in low concentrations. Pathologic conditions like bacterial infections, inflammations or tissue destruction are followed by CRP concentration increase due to the release of proinflammatory cytokines (1). Bacterial endotoxins are the strongest stimulators of inflammatory acute phase reaction (2). The highest CRP concentrations are caused by infections by Gram-negative bacteria (3).
The measurement of C-reactive protein concentration is of extraordinary importance in the diagnosis and follow-up of infection in preterm infants and newborns (1). The onset of sepsis in the newborns may manifest by unspecific symptoms and is diagnosed only on the basis of laboratory findings. Untimely diagnosis of bacterial sepsis is one of the major causes of morbidity and mortality in preterm infants and newborns (2,3,4,6,7).
There is a considerable number of publications about causes, difficulties in making timely diagnosis, diagnostic significance of certain mediators of inflammation in sepsis and treatment, of neonatal sepsis (criteria for instituting and discontinuing therapy (2–6, 8–12).
Recommendations of some institutions are that CRP, though unspecific, has the best diagnostic value as an individual test, is an indicator in therapy onset and monitoring, and may also be used as an indicator to identify the time-point when antibiotic therapy may be safely discontinued (1,2,6,10,11).
Clinical significance of CRP concentration increase within the reference interval induced many manufacturers to develop tests for CRP determination particularly designed to measure very low concentrations. Manufacturers of both nephelometric and turbidimetric reagents turned to latex micro-polymers to achieve the necessary sensitivity so that laboratories have at their disposal several reagent types for CRP determination: highly linear for samples analyzed for general inflammation and infection, and sensitive (SCRP) and highly sensitive (HSCRP) that are employed in neonatology and assessment of the risk of cardio- and cerebrovascular diseases.
The Randox company produced a new combined Full Range CRP assay, characterized by the measuring range of 0.1-160.0 mg/L. When applying Olympus reagents for the same measuring range, we use two reagents and three applications. Considering the importance of early detection of sepsis in preterm infants and newborns, we examined the new reagent on samples from this population. In comparison to the previously applied analytic procedure, expected advantage of the examined reagent was that the use of one reagent instead of a combination of two reagents and three applications should contribute to faster diagnosis of sepsis in such a sensitive population and also to reduced measurement costs.

Analytical assessment of a new combined Randox Full Range assay for determination of CRP concentration in comparison to Olympus reagents as reference reagents.

Serum CRP concentration was determined by the combined Full Range CRP assay produced by the Randox company (CP3847) and compared with two reagents produced by the Olympus company (OSR6147 and OSR6185) that are routinely used in the Clinical Institute of Chemistry, Sestre milosrdnice Clinical Hospital.
The Randox Full Range assay uses latex micropolymer-enhanced immunoturbidimetric test which allows determination of CRP concentration in the serum/plasma in the 0.1-160.0 mg/L range. The reagent was applied on the Olympus AU 640 using the application recommended by the Randox company. The original calibrator by the Randox company (CP2499) was used, as well as High Sensitivity CRP Control 2 (CP2477) and CRP Control samples.
The Olympus reagents used for comparison to the Randox Full Range CRP assay were:
1) Olympus System reagent for CRP (OSR 6147), an immunoturbidimetric reagent for the 5.0-300.0 mg/L concentration range.
The original calibrator by the Olympus company was employed for calibration (ODR3021 Serum Protein Multi-Calibrator), and original control samples by the Olympus company for quality control: ITA Control    Sera Level 1 (ODC0014), ITA Control Sera Level 2 (ODC0015) and ITA Control Sera level 3 (ODC0016).
2) Olympus CRP Latex reagent (OSR6185), an immunoturbidimetric reagent intended for early diagnosis of infection in preterm infants and newborns. Two applications are available for this reagent:
sensitive - for the 0.5-20.0 mg/L concentration range (SCRP)
highly sensitive - for the 0.05-2.00 mg/L concentration range (HSCRP).
Original calibrators by the Olympus company were used for calibration (ODR3031 – contains five calibration solutions, calibration solutions 3, 4 and 5 are used for sensitive application, while calibration solutions 1 and 2 for highly sensitive application). For quality control, Olympus CRP (Latex) Control Sera (ODC0013 - Control 1 and Control 2) were used.
Analytical evaluation included within-run imprecision, between-run imprecision, inaccuracy and comparative determinations of CRP concentration in the samples of newborns and preterm infants. This study did not require collection of additional blood samples; it involved the use of routine analytical samples.

Results were processed using the statistical program MedCalc (Ver. 9.0.1.0.; Franck Schoonjans, Belgium). Statistical significance of differences was examined by Student T-test. Coefficients of correlation (Pearson’s and coefficient of concordance) were calculated, and linear regression analysis performed according to Passing-Bablok. A change was considered statistically significant if p<0.05.

Results of the statistical processing of results of comparative determinations of CRP levels in patient samples (mean value, standard deviation, statistical significance of differences, coefficients of correlation, linear regression analysis according to Passing-Bablok) are presented in Tables 4-5.
Tablica 4. Statistical significance of differences and coefficients of correlation obtained by comparative determination of CRP concentration in three subject groups using reagents by two different manufacturers

Tablica 5. Regression analysis according to Passing-Bablok

Schematic presentation of linear regression analysis according to Passing-Bablok is laid down in Figures 1-3. 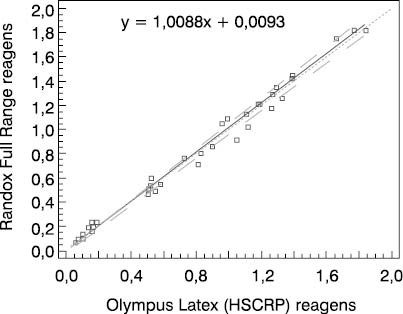 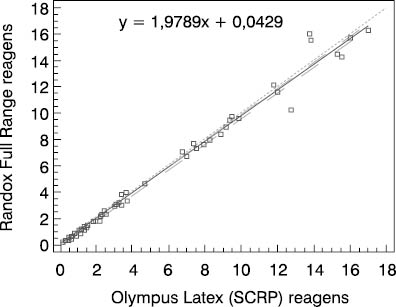 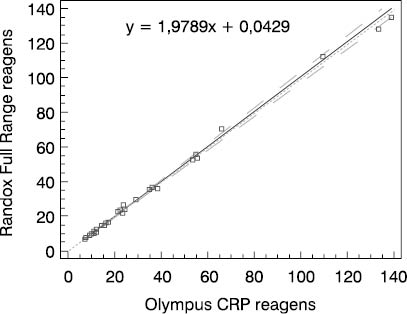 The results obtained by examining the Randox Full Range assay for measuring CRP concentration demonstrated satisfactory imprecision, both within-run- (CV ≤ 2.18%) and between-run imprecision (CV ≤ 1.64%). Satisfactory results were also achieved during examination of inaccuracy (R ≤ 3.67%).
We compared two reagents by different manufacturers in three subject groups (three different concentration ranges). Comparative results of linear regression analysis according to Passing-Bablok showed very good agreement of the two methods as the slope was close to 1.0 and almost equal in all three groups, while the intercept was low. In group 2 which involved 0.5-20.0 mg/L CRP concentration as the measuring range, the results obtained by the Randox Full Range assay differed by a slight constant (within confidence interval for intercept, 0 not included, a= -0.0429). The coefficients of correlation calculated for each subject group showed a high degree of correlation between the Randox Full Range assay and Olympus reagents. Besides, the coefficient of concordance did not differ from the Pearson’s coefficient, allowing us to conclude on the actual, almost ideal correlation between CRP concentrations obtained by using the foregoing two reagents. The coefficient of concordance (ρc) is a measure of precision and accuracy. It comprises the Pearson’s coefficient of correlation (r) and a correction factor (Cb) which is a measure of the bias from the best correlation curve at a  slope of 450 (ρc= r x Cb).
Therefore, we may conclude that the Randox Full Range assay could replace Olympus reagents which were used as reference reagents in this study since their analytical reliability has been confirmed by long-term use.
The results obtained are in consistence with results by other authors who compared the same reagents (within-run imprecision: CV ≤ 3.3%; between-run imprecision: CV ≤ 3.7%; results of regression analysis of comparative determinations of CRP concentration in patient samples: r2 ≥ 0.9956) (13).
Our results showed that determination of CRP concentration was equally reliable and reproducible with both reagents. The advantage of the Randox Full Range CRP assay is that a single reagent covers the concentration range from 0.1 to 160.0 mg/L, the fact that is of particular importance for pediatric samples as it allows faster availability of results, whereas the Olympus company employs two reagents and three applications for the same range. The advantage of the Olympus CRP reagent is its very broad measuring range, i.e. 5.0-300.0 mg/L which is very suitable for patients from other departments and wards (department of surgery and intensive care units).