[3] Department of Medical Biochemistry and Hematology, School of Pharmacy and Biochemistry, University of Zagreb, Zagreb, Croatia

Aim: To present the electrophoretic pattern of alkaline phosphatase (ALP) isoenzymes in serum of infants and children exhibiting increased total ALP catalytic activity in the course of acute respiratory disease.
Subjects and methods: Results obtained in 21 children (17 of them infants), including 13 male and eight female children aged 2 months to 8 years, hospitalized for respiratory diseases are presented. Total ALP catalytic activity was determined and electrophoretic separation of ALP isoenzymes was performed in children’s sera.
Results: Increased total ALP catalytic activity (range, 528–5622 U/L) during hospital stay was recorded in eight (38.1%) children. A typical picture of benign transient hyperphosphatasemia (TH), which implies the occurrence of fast anodal fraction (faster than hepatic fraction) and near-cathode fraction (faster than bone fraction), was recorded in five children. The placental-like isoenzyme was detected in two children. Expression of bone fraction and placental-like fraction was recorded in a rachitic child. Prehepatic ALP was expressed in two children, and hepatic ALP isoenzyme in one child.
Conclusion: Acute respiratory disease in infants and children may entail transient increase in the ALP catalytic activity with the occurrence of various isoenzyme bands such as fast anodal and near-cathode fraction (in TH), prehepatic fraction and placental-like fraction. TH is verified when total ALP activity has decreased and returned to reference intervals. In this case, no additional testing is required.

Alkaline phosphatase, orthophosphate-phosphohydrolase (ALP; EC 3.1.3.1) is a common term for a group of glycosylated enzymes (isoenzymes) with optimal activity in the alkaline range (pH 9.8–10.5). The isoenzymatic forms of different origin (liver, kidney, bone, placenta and intestine) have different physicochemical and immunologic characteristics that are employed in the methods of isoenzyme separation (1). The catalytic activity of ALP undergoes modification in childhood due to bone growth; it is moderately increased in the first three months of life, while in puberty it is two- to three-fold that in adults.
Transient hyperphosphatasemia (TH) in infants and children is a benign increase in the catalytic activity of serum ALP, which may persist for several weeks (2). TH was first described in 1954 (3). As these children show no clinical signs of a bone or liver metabolic disease (4), TH is detected incidentally, on routine laboratory work-up. TH generally occurs by the age of 5 years; however, recurrences in adults have been described (5). The diagnosis of TH is made when ALP values have significantly decreased or returned to reference range within 3–4 months (5-7).
As TH may occur in children with respiratory diseases (2), the aim of the study was to show the electrophoretic pattern of ALP isoenzymes in serum of children exhibiting an increased total ALP catalytic activity in the course of acute respiratory disease.

Results obtained in 21 children (17 or 81% of them infants), 13 male and eight female, aged 2 months to 8 years, are presented (Table 1). Because of the severity of acute respiratory disease (mostly bronchiolitis), study children were hospitalized at Srebrnjak Children’s Hospital in Zagreb between January 1 and February 28, 2007. In three children, radiological examination, leukocytosis and marked increase in the C-reactive protein (CRP) concentration pointed to bacterial etiology of their respiratory disease. The respiratory syncytial virus (RSV) infection was demonstrated in most children. Besides children with an increased total ALP catalytic activity, presentation is made of the children with bronchiolitis/pneumonia whose total ALP activity was within the reference range.
Table 1. General characteristics of study patients 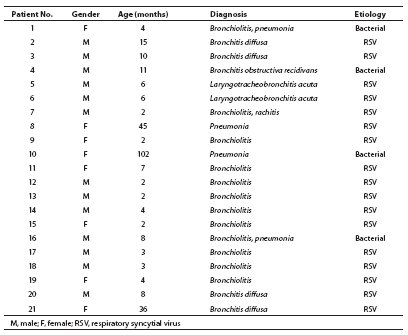 Increased total ALP catalytic activity (range, 528-5622 U/L) was found in eight (38.1%) children, and increased total activity of one or more other enzymes, i.e. aspartate aminotransferase (AST), alanine aminotransferase (ALT), gamma glutamyltransferase (GGT) and lactate dehydrogenase (LD), in 14 children. One month and a half upon completion of hospital treatment, total ALP activity was within the age-adjusted reference range in all study children. Electrophoretic separation of ALP isoenzymes showed normal age-specific isoenzyme pattern in ten (47.6%) children (Table 2, No. 12–21) (10). A characteristic TH picture with the appearance of fast anodal fraction (faster than hepatic fraction) and near-cathode fraction (faster than bone fraction) was recorded in five children (Table 2, No. 1–5). The placental-like isoenzyme was found in two children (No. 6 and 11), and bone fraction along with the placental-like isoenzyme fraction in one rachitic child (No. 7). Prehepatic isoenzymes were detected in two children (No. 8 and 9), whereas hepatic isoenzyme was found in one child (No. 10). Comparison of diluted patient samples (lanes 1–7) and lectin pretreated samples (lanes 1’–7’) is presented in Figure 1.
In the infant affected with bronchiolitis/pneumonia, total ALP catalytic activity (5622 U/L) decreased in 54 days to the reference range (349 U/L), while the isoenzyme pattern showed normal finding. In the rachitic child, the value of ALP decreased with vitamin D therapy.
Table 2 Analyte values in children during hospital stay (bold, analyte values exceeding reference range) 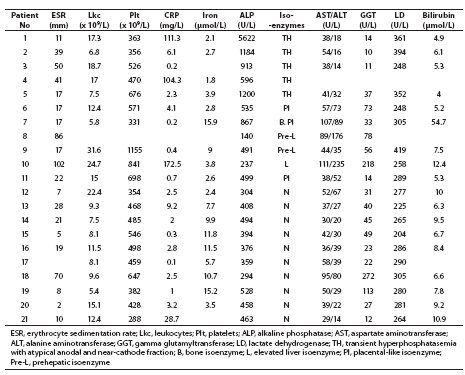 The study included children exhibiting increased total ALP catalytic activity in the course of acute respiratory disease, and varying isoenzyme patterns obtained by electrophoretic separation of ALP isoenzymes, i.e. 1) typical TH pattern; 2) placental-like isoenzyme; 3) prehepatic isoenzyme; 4) markedly increased hepatic isoenzyme; and 5) bone ALP isoenzyme expression in the rachitic child.
The criteria for the diagnosis of benign TH include age below 5 years; various symptoms such as respiratory infection, diarrhea and vomiting; no clinical or biochemical signs of bone or liver disease; increased total ALP values of 3- to 50-fold upper reference value for age; and return to the reference range within 4 months (2). Qualitatively and quantitatively, the isoenzymes display a specific pattern, i.e. increase in the activity of the fast anodal and near-cathode fraction (11). TH usually develops during the course of an infection (12), acute viral infections in particular (13,14), showing a male predominance (male to female ratio, 1.29:1) (15). TH may occur in mild respiratory or intestinal infections (16). Our infants with TH suffered from a serious acute respiratory disease of viral (RSV) or bacterial etiology. Suzuki et al. report elevated concentration of antibodies to Echo 22, Entero 71 and Coxsackie B4 enteroviruses in children with infectious diseases of upper airways accompanied by fever and diarrhea that developed TH (15). A case of rotavirus infection in a liver transplanted child has also been described (7). Parisi et al. report on TH in a patient with exanthematous fever following anti-measles vaccination (17). TH may occur in 2.8% of children with liver or kidney transplant (18). Placental isoenzyme cannot be detected in newborns (19). The occurrence of placental-like isoenzyme, the origin of which can only be speculated, has not yet been reported as a phenomenon accompanying respiratory disease in infants and children. It remains to determine whether it maybe derives from the thymus (20) or the lungs in the course of respiratory disease. The occurrence of prehepatic ALP isoenzyme and the increased activity of hepatic isoenzyme in our subjects may have been consequential to medicamentous therapy (the patients also showed increased catalytic activity of aminotransferases, GGT and LD), however, it should be additionally investigated.
Electrophoretic separation mostly identified isoenzymes of bone and hepatic origin in TH (21). The changed motility of hepatic and bone isoenzymes (anodal and near-cathode fraction) seems to be caused by the increased amount of sialic acid. The increase in the catalytic activity of ALP has been attributed to the possibly increased ALP synthesis due to the action of vitamin D metabolites, and in disease due to the possibly reduced hepatic clearance from the circulation caused by enhanced sialinization or hepatic effect of some drugs (21). However, the true origin of ALP isoenzymes cannot be assessed on the basis of electrophoretic separation. The finding of fragmented hepatic and bone isoenzymes may be consequential to a decreased clearance in the course of viral infection (22). Apart from transient hyperphosphatasemia, cases of permanent hyperphosphatasemia, which may be hereditary asymptomatic (23), non-hereditary (24), or in association with mental retardation (25), have also been reported.
To our knowledge, the occurrence of TH in Croatia was described in 1986 (26). How well is TH recognized? Or, is it simply ascribed to the physiological growth of bone mass? What is the prevalence of TH in children with acute infections? Is the ALP activity determined only in a minor proportion of children with infections?
The occurrence of increased ALP catalytic activity in an infant in the course of an acute respiratory infection points to the existence of benign TH. TH is subsequently verified, i.e. when the activity of ALP has significantly decreased and returned to the reference range. If the values of ALP normalize within 4 months, no additional testing is required (6,7).