Albizia is a large genus of trees, of the pea family (Fabaceae), native to warm regions of the Old World. The alternate, compound leaves are bipinnate. Albizia (A.) chevalieri is a tree of acacia type native to tropical and subtropical regions including Nigeria and Niger Republic, with loose balls of whitish fragrant flowers and flat brown pods. The small flowers are borne in globular or finger-shaped clusters. The fruit is a large, strap-shaped pod. Several other species of the Albizia exist and are grown as ornamentals (1).
The leaf extract of A. chevalieri is used either as cold water decoction or dried, ground and sieved leaf mixed with pap, for the management of diabetes mellitus by traditional medical practitioners in some parts of Niger Republic and Sokoto, Nigeria. The extract has been reported to have a significant hypoglycemic effect (2).
The hypoglycemic properties of the plant and indeed the medicinal properties of plants used by traditional medical practitioners may be due to one or more of the many arrays of chemical constituents of the plant material. These phytochemicals include complex carbohydrates, alkaloids, glycopeptides, terpenoids, tannins, cyanogens, peptides and amines, steroids, flavonoids, lipids, coumarins, sulfur compounds and inorganic ions, among numerous others. The hypoglycemic agent of the A. chevalieri extract is thought to be a phenolic compound (2). Some of these compounds may be toxic, and thus the plants containing them, when consumed could confer varied levels of toxicity to the individual. Some plants may therefore be inherently dangerous, containing naturally occurring toxins, often with cytotoxic, carcinogenic effects, or some other toxic properties (3). Carica papaya, which is a known hypoglycemic plant (4,5), for example, is reported to induce sterility in experimental animals (5,6). The histopathologic changes observed in the organs of rats treated with raw larva of Cirina forda (Westwood) have also suggested that the plant is toxic (7). It has been reported that aqueous leaf extract of A. chevalieri has an LD50 of >3000 mg/kg body weight and has no effect on most serum liver and kidney function biochemical indices of albino rats (8).
In the present study, the in vivo acute and sub-chronic effects of the crude aqueous leaf extract of A. chevalieri on hematologic variables and histopathologic findings of albino rats were assessed.

All chemicals and reagents used in the study were of analytical grade.

A. chevalieri was obtained from Sanyinna village, about 50 km south of Sokoto, Nigeria.A taxonomist from the Botany Unit, Department of Biological Sciences, Usmanu Danfodiyo University Sokoto, identified the plant material. A voucher specimen (UDUS/VS/04/09) was prepared and deposited in the Department Herbarium. The leaves were sun dried, ground using laboratory pestle and mortar, and sieved through a 1-mm2 sieve. The powdered leaves were kept in plastic bags in desiccators until required.

The powdered plant material was soaked in cold distilled water at 20% (w/v) for 24 h. The extract was filtered through several folded clean white muslin cloth to remove debris. The filtrate was then filtered through a Whatman no. 1 filter paper and evaporated in a drying cabinet set at 40 °C (9). The residue obtained was 18.75% (w/w). The evaporated extract was then reconstituted in distilled water at 30% (w/v) and stored in small-capped plastic containers at +4 °C until required. This was used for both acute and sub-chronic toxicity tests. The recommended dose of the extract in Nigerian traditional medicine is about 130 mg/kg body weight. It has been reported earlier that a dose of 100 mg/kg body weight is effective in reducing glycemia levels in Wistar rats (2).

Apparently healthy male Wistar rats weighing 163±11 g were purchased from National Institute for Trypanosomiasis Research (NITR) Vom, near Jos Plateau State Nigeria. The rats were allowed to acclimatize to the laboratory environment for a week during which they were allowed free access to clean water and food.

The animals were divided into six groups of seven each and labeled AC, BC, CC, DC, EC and FC. The crude aqueous extract was administered in single oral doses of 500, 1000, 1500, 2200 and 3000 mg/kg body weight in groups BC, CC, DC, EC and FC, respectively. Group AC animals were administered 0.5 mL of distilled water by the same route and served as control. The animals were weighed before and 72 hours after the administration of the drug, and were observed for toxic symptoms such as weakness or aggressiveness, food refusal, weight loss, diarrhea, discharge from eyes and ears, noisy breathing and mortality for 72 hours (10,11).

There were 6 groups of 7 animals each labeled SC, TC, VC, XC, YC and ZC. The crude water extract was administered orally in 5 gradations of 150, 300, 500, 1000 and 1500 mg/kg body weight per day for 28 days to groups TC, VC, XC, YC and ZC animals, respectively. The control group (group SC) received 0.5 mL of distilled water, under similar experimental conditions and by the same route and for the same number of days. Body weight changes were monitored throughout the experimental period on a weekly basis. The animals were also observed for the manifestation of toxicity and mortality as in acute toxicity test.
At the end of the observation periods (both the sub-chronic and acute toxicity tests), the animals were anesthetized using chloroform vapor. Blood samples were then collected by cardiac puncture and transferred into labeled plastic sample bottles containing EDTA (disodium ethylenediamine tetraacetate) at 1.5 mg/mL of blood (12).

Hemoglobin (Hb) levels in blood samples were determined by the spectrophotometric method (12). Red blood cell (RBC) count was determined by the visual counting method (12). Packed cell volume (PCV), white blood cell (WBC), differential and platelet (Plt) counts: utilizing mechanical expansion and optical magnification, augmented by supravital cell staining, the QBCII system derives platelet count, WBC and counts of the two main WBC subgroups from linear measurements of the packed cell layers in a buffy coat. As in conventional microcentrifugation procedures, the PCV is also measured (13). The blood tube was filled with anticoagulated blood using a pipetter. The tip of the tube was cleaned off the blood with tissue paper. The tube was sealed and gently rolled between fingers for about 5 seconds. The unsealed end of the tube was slid over the tip of the prepositioned float and pushed until the float was inside the tube as far as possible. The blood tube was then centrifuged on the rotor of the QBCII centrifuge for 5 minutes and read on the QBCII reader. MCV, MCH and MCHC were calculated (12).

Three animals were selected randomly from each group, anesthetized with chloroform vapor and dissected through a central abdominal incision. The kidney, heart and liver samples were collected and immediately fixed in 10% saline-formalin in labeled sample plastic bottles. The tissues were dehydrated in graded concentrations of xylene, embedded in molten paraffin wax and sectioned at 5 μ. Tissue sections were fixed on grease-free glass slides and stained with hematoxylin and eosin for light microscopy at 400X (14). Photomicrographs of some of the tissues were taken using a microscope fitted with a camera unit, and processed routinely in a color photo laboratory.

The results are presented as mean ± standard deviation. The results of hematologic analyses were analyzed using analysis of variance (ANOVA). The post hoc tests multiple comparisons using LSD were utilized to identify differences in means. P values lower than 0.05 were considered statistically significant. Statistic softwarw SPSS Windows, Version 10, was employed for the analysis. 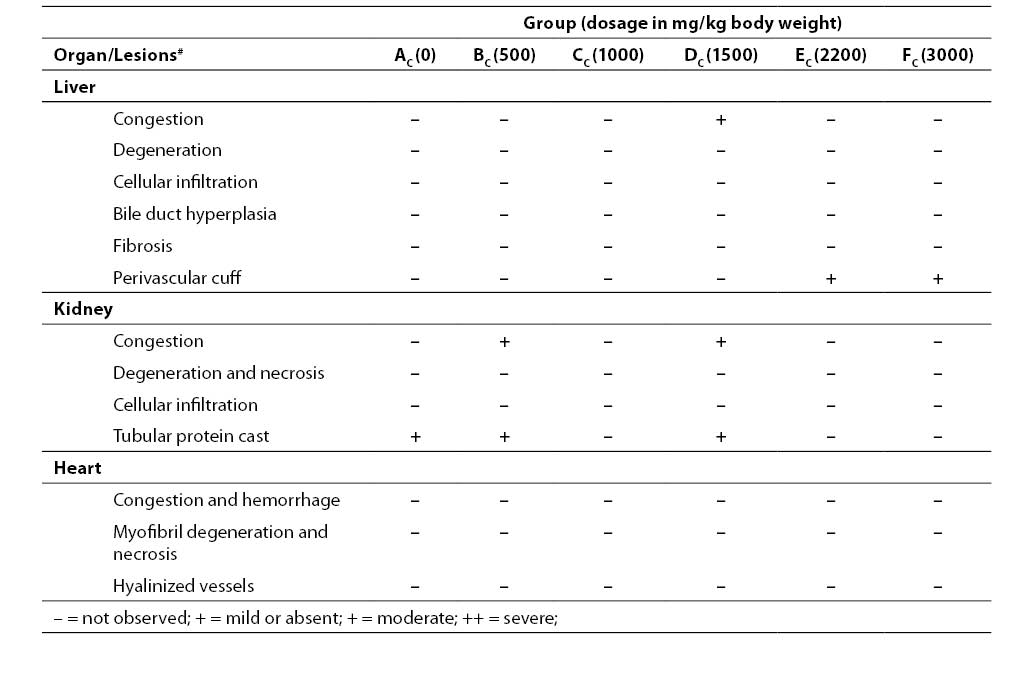 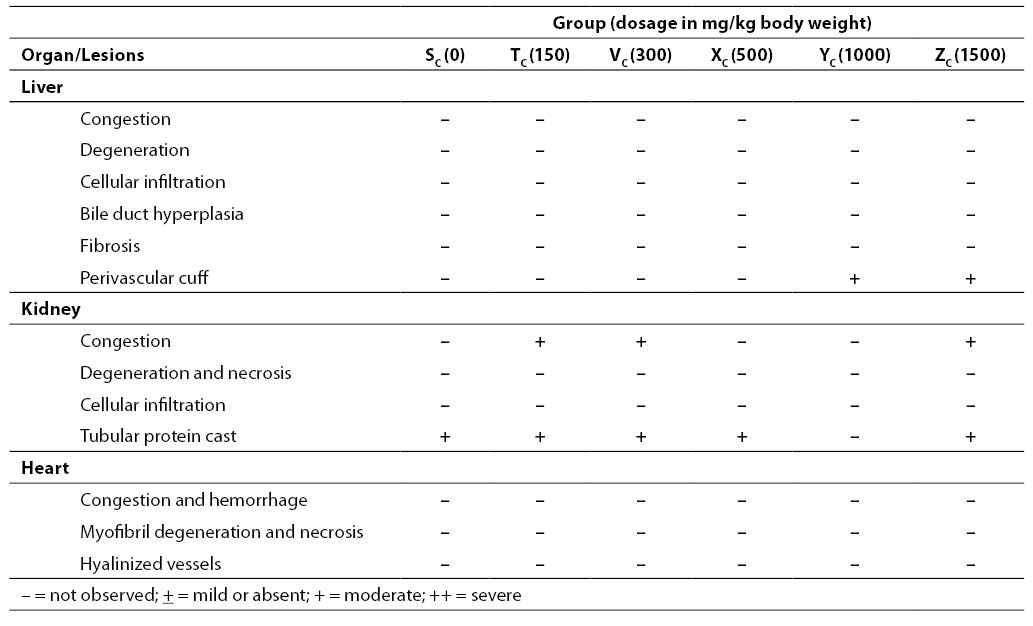 With accurate determination of hematologic parameters, about 80% of hematologic diagnoses can be made and information collected to evaluate the stage of a particular disease or to diagnose some diseases that may not be directly related to the hematopoietic system (15). Information generated from white blood cell count, without differential count may only be partial and in some cases misleading. Thus, granulocytes are estimated in differential count to establish the nature of infection (15). Eosinophils are elevated in allergic disorders of nearly all kinds, parasitic infections, and to a lesser extent in malignancy (15). Monocyte elevation, on the other hand, is seen in chronic inflammatory disorders, whereas lymphocytes are elevated in chronic lymphocytic leukemia, infectious diseases like pertussis, and viral diseases like measles, rubella and chicken pox (15). The results of the present study suggested that total leukocyte and differential counts were normal in both test models, therefore being indicative of the non-allergic nature of the extracts. It was also an indication that the extract did not compromise the immune status of the animals.
Iron deficiency is the major cause of hypochromic microcytic anemia, in which case there may be a borderline low Hb and PCV even if the RBC is normal. Acute loss of blood cell mass as in hemorrhage and hemolysis is the major cause of normochromic normocytic anemia. In macrocytic anemia, there is a decrease in the absolute number of RBC per unit volume. In this case, the individual cell is larger in volume and diameter and contains more hemoglobin. As a result, MCV and MCHC are elevated. This form of anemia is seen in folic acid and vitamin B12 deficiencies. In the present study, RBC (P=0.067; 0.121), PCV (P=0.343; 0.195) and Hb (P=0.730; 0.451) were not significantly affected as a result of either acute or sub-chronic administration of the extract. In addition, other erythrocyte variables (MCV, MCH and MCHC) were not affected due to the treatments either. This may be an indication that the extract does not induce any form of anemia at the tested concentrations. In view of the fact that the therapeutic dose of the extract is by far lower than the amounts used in toxicity tests, it may be appropriate to suggest that the extract may not affect erythropoiesis, hemoglobin synthesis or other factors related to RBC metabolism when used at the therapeutic dose. Neither platelets, were affected significantly (P>0.05) in the reported study. Similar results have been reported forStrychnos potatorum, a plant used in India for the treatment of a number of diseases including diabetes mellitus(16). However, Ali and Bashir (17) and Taiwo et al. (18) report that the extracts of Aviccenia marina and Aloe vera, respectively, affected significantly the hematologic variables of rats treated with acute and sub-chronic doses.
The organ pathology scores of the rats after acute and sub-chronic oral administration of the aqueous extract of A. chevalierileaves (Tables 7 and 8, respectively) indicated that the liver, kidney and heart of the rats had normal architectures. The observed changes were not significant and were restricted to the kidney in both test models. The changes were mainly mild congestion and protein cast that were not dose dependent. Where there were mild changes, they occurred in less than 20% of the tested population. It has been reported that the liver of rats treated with both acute and sub-chronic doses of aqueous ethanolic leaf extract of Senna alata (19) and aqueous extract and seed powder of Strychnos potatorum (16)were not significantly affected. Acute treatment with the extract of a salt tolerant plant, Avicennia marina (17) and aqueous leaf extract of raw Aloe vera (18), however, caused significant changes in the histology of the liver and kidney of rats. The liver, being the first organ that encounters all absorbed materials from the gastrointestinal tract, has been shown to respond to toxicologic insults in a number of ways including cellular degeneration and necrosis, bile duct hyperplasia and fibrosis (7). The kidney is an excretory organ that removes metabolized and non-metabolized toxic materials from the body; hence, it would be exposed to high concentrations of noxious materials that could cause lesions.

The aqueous leaf extract of A. chevalieri, which has been reported to exert a significant hypoglycemic effect in alloxan diabetic rats (2), may therefore be considered relatively safe at the tested doses. In an earlier work by Saidu et al. (8), the extract has been reported to have an LD50 of greater than 3000 mg/kg body weight and to show no significant effect on serum liver and kidney function biochemical parameters.