[1] Reference Center for Clinical Pediatric Allergology of the Ministry of Health and Welfare, Zagreb, Croatia

Aim: To present results of monitoring hepatotoxicity of antituberculosis drugs in a mother and a child admitted for hospital treatment due to pulmonary tuberculosis.
Patients and methods: A mother (23 yrs) and a child (2 yrs and 4 months) were on isoniazid, rifampicin, pyrazinamide,ethambutolandstreptomycin therapy. To monitor the hepatotoxicity of these antituberculosis drugs, catalytic activities of aspartate aminotransferase (AST), alanine aminotransferase (ALT), alkaline phosphatase (ALP), gamma glutamyltransferase (GGT), lactate dehydrogenase (LD) and bilirubin were determined.
Results: The highest increase in enzyme activity in the mother was recorded two weeks since the institution of therapy: AST, ALT, ALP, GGT and LD activities were 34-fold, 43-fold, 1.2-fold, 5.5-fold and 1.7-fold higher, respectively, than the upper normal values. In the child, the highest rise in enzyme activity occurred during the 1st week since the application of therapy; compared to the upper reference range values, AST, ALT, GGT and LD were 28.1-, 29.2-, 2.5- and 3.3-fold higher, respectively. After temporary discontinuation of therapy, the catalytic activity levels returned within the reference range limits, and the therapy was gradually reintroduced until full dose was achieved. During the subsequent period until recovery, both the mother and the child tolerated the antituberculosis drug therapy well, i.e. without elevation of enzyme activity.
Conclusion: Markedly elevated catalytic activities of AST and ALT in the mother and the child during antituberculosis drug therapy indicate the occurrence of a possible predisposition for severe hepatotoxicity. During initial weeks of antituberculosis drug administration, it is necessary to monitor the activity of liver enzymes every week in order to detect their possible hepatotoxicity and carry out prompt therapy evaluation.

Pulmonary tuberculosis implicates the inflammation of lungparenchyme caused by intracellular bacteria, Mycobacterium tuberculosis. Although antituberculosis drugs have been administered for about sixty years, tuberculosis has persisted as a leading cause of death worldwide (1). Antituberculosis chemotherapy may cause liver damage both in patients with active tuberculosis (isoniazid- INH,rifampicin- RIF, pyrazinamide - PZA, ethambutol - EB, streptomycin - SM are applied) and in individuals with latent tuberculosis infection (isoniazide is administered). Hepatotoxicity may manifest by transient asymptomatic increase in the catalytic concentrations of some liver enzymes (2), but also by the occurrence of hepatitis with fatal outcome (3).
The major medication in tuberculosis therapy and prophylaxis is isoniazide. In addition to N-acetyl transferase (NAT), CYP2E1 cytochrome (P450 2E1) and glutathione S-transferase (GST) are involved in isoniazid biotransformation (4). Polymorphism of the genes that encode these enzymes may affect enzyme activity. Due to the association of gene polymorphisms with isoniazid hepatotoxicity (5), the following genotypes have recently been most investigated: NAT2 slow acetylator, CYP2E1 (1A/1A) homozygous genotype, and GSTM1 (null GSTM1) homozygous genotype (5-8). Based on animal studies, it appears that INH hepatotoxicity is caused by its metabolite hydrazine (9).
The catalytic activity of aspartate aminotransferase (AST) may be 3-fold that of the upper normal value in symptomatic hepatotoxicity, and 5-fold or even higher in asymptomatic hepatotoxicity (10). Based on the rise in catalytic activity, AST hepatotoxicity may be graded as mild (less than 5-fold AST elevation), moderate (5-10-fold AST increase), and severe (more than 10-fold AST elevation, or > 500 IU/L) (2). Apart from AST elevation, increased catalytic activity of alkaline phosphatase (ALP) and elevated bilirubin concentration may be occasionally observed and ascribed to the action of RIF (2). Liver dysfunction due to antituberculosis drugs usually manifests during initial weeks since drug administration (11). In order to monitor tuberculosis activity and detect possible hepatotoxicity of antituberculosis drugs, biomarkers of inflammation are in routine practice determined in patients every 14 days together with catalytic activity of liver enzymes and bilirubin concentration.
In this report, we present the results of monitoring hepatotoxicity of antituberculosis drugs in a mother and a child treated for pulmonary tuberculosis. According to our knowledge, this is the first overview of hepatotoxicity of antituberculosis drugs in a Croatian family.

IK, 23 years old, had not been severely ill until affected by this disease. She was vaccinated and had a BCG scar. She fell ill a month before being admitted to hospital, with coughing, fever in afternoon hours reaching 38.5 oC, exhaustion, and weight loss. On admission and auscultation, rattle was heard in the left side of her chest. Tuberculin skin test with 2 tuberculin units of PPD revealed 15 mm infiltrate. Lung X-ray revealed infiltrative destructive changes in the left upper lung lobe. Tracheoscopic examinationindicated hyperemia inthe left upper lobe. Mycobacterium tuberculosis was detected in bronchial aspirate and sputum.
Therapy: INH 5 mg/kg, RIF 10 mg/kg, PZA 25 mg/kg, pyridoxine (vitamin B6) 20 mg/kg.
Erythrocyte sedimentation rate was increased prior to administration of antituberculosis drugs (78 mm), the patient had lymphopenia (0.26 x 109/L), decreased concentration of hemoglobin (117 g/L) and iron (5.7 μmol/L) and increased CRP concentration (65 mg/L) (Table 1); other results were within reference ranges. A week after therapy initiation, the levels of liver enzymes increased, showing further rising tendency (Table 1, Fig. 1). Index of maximum increase in enzyme activities was recorded during the 2nd week since therapy institution (Fig. 2), and AST, ALT, ALP, GGT and LD levels were 34-, 43-, 1.2-, 5.5- and 1.7-fold those of the upper normal limits, respectively. At the same time, total bilirubin concentration was 56.8 μmol/L (2.8-fold increase compared to the upper normal limit). Upon discontinuation of therapy, decreased values for the investigated biomarkers were observed so that the drugs were gradually reintroduced in a reduced dose until reaching the full dose. The drugs were well toleratedduring continued treatment, and Mycobacterium tuberculosis was successfully eliminated.

MK, a child at the age of 2 years and 4 months, the son of the patient IK, had not been ill before. He was vaccinated and had a BCG scar. Two weeks before admission for hospital treatment he had begun coughing, with fever in the afternoon hours reaching 39 oC. Normal breathing sound was detected by auscultatory examinationon admission. The result of tuberculin skin test with 2 tuberculin units of PPD was 15 mm bullous infiltrate. Lung X-ray showed pronounced enlargement of the hili of lymph nodes and medium lobe atelectasis. Tracheobronchoscopic examination revealed endobronchial granuloma in the right major bronchus. Mycobacterium tuberculosis was confirmed in the gastric fluid.
Therapy: INH 5 mg/kg, RIF 10 mg/kg, PZA 30 mg/kg, SM 20 mg/kg, pyridoxine (vitamin B6) 20 mg/kg.
Prior toantituberculosis drug administration: erythrocyte sedimentation rate 63 mm, the patient had moderate leukocytosis (16.86 x 109/L), lymphopenia (0.44 x 109/L), decreased concentrations of hemoglobin (101 g/L) and iron (2.1 μmol/L), elevated CRP concentration (26.5 mg/L), IgG (14.7 g/L), IgA (2.15 g/L) (Table 1); other results were within age-adjusted reference ranges. AST, ALT, GGT and LD activities were increasing a week since the commencement of therapy (Table 1, Fig. 1). The index of maximum elevation of enzyme activities was recorded during the 1st week since therapy initiation (Fig. 2), while elevations of AST, ALT, GGT, and LD were 28.1-, 29.2-, 2.5-, and 3.3-fold those of the age-adjusted upper normal limits, respectively. ALP values did not increase beyond normal values. At the same time, total bilirubin concentration was 36.6 μmol/L (1.8-fold increase compared to the upper normal limit). Upon therapy discontinuation, decreased levels of the investigated biomarkers were observed so that decreased drug doses were progressively reintroduced and increased until reaching the full dose. During continued therapy, the drugs were well tolerated and Mycobacterium tuberculosis was effectively eliminated. 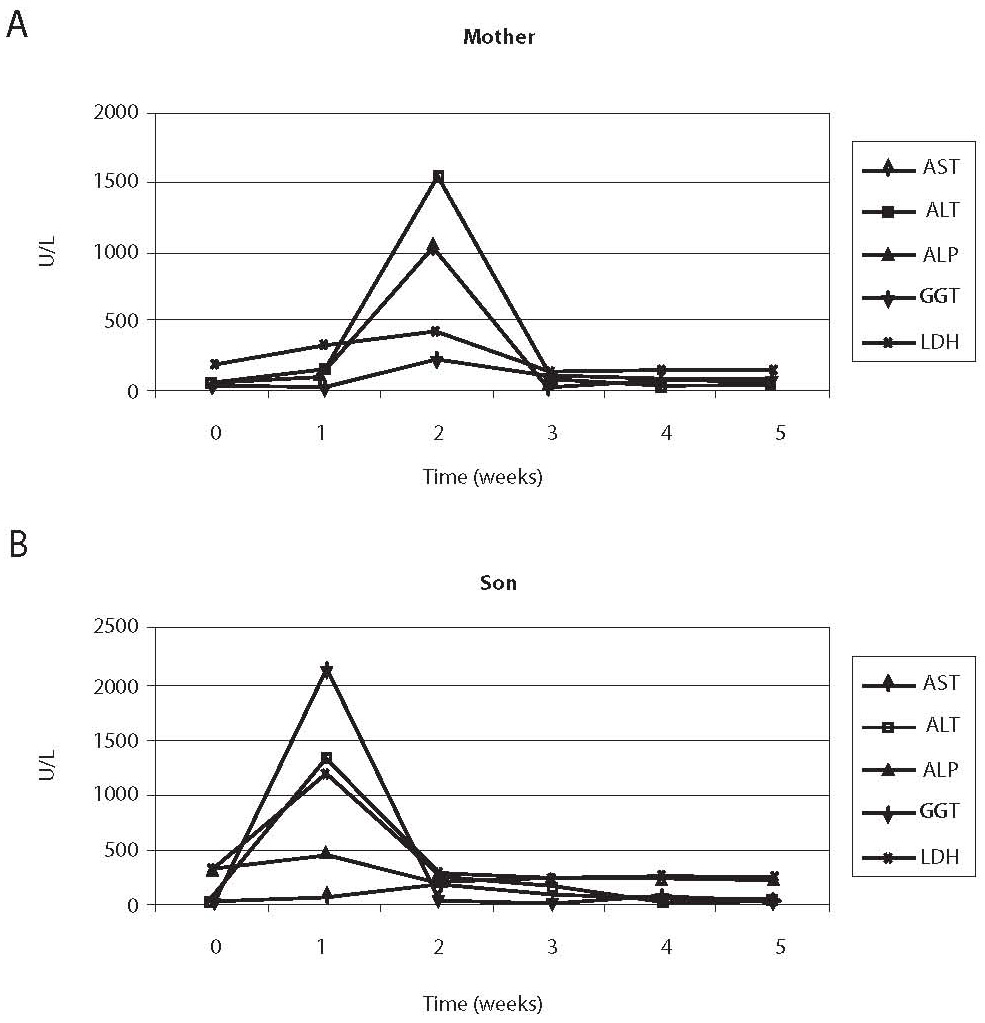 Figure 1. Comparison of changes in enzyme activities in the sera of the mother (A) and the child (B). Maximum increase in the mother’s serum manifested during the second week, and in the child’s serum during the first week since therapy initiation.
Table 1. Catalytic activities of AST, ALT, ALP, GGT and LD during first 5 weeks of therapy 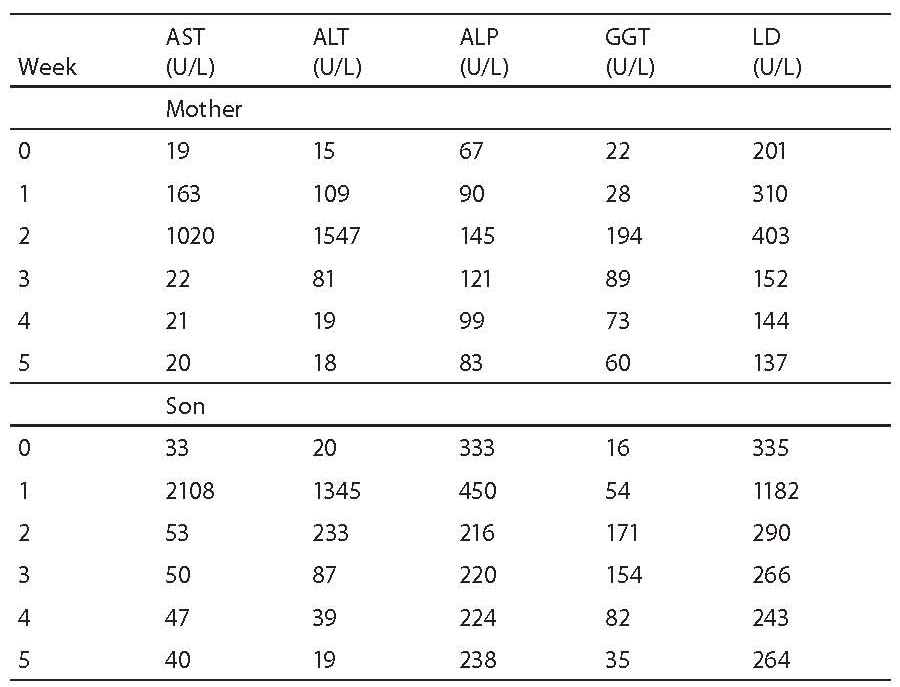 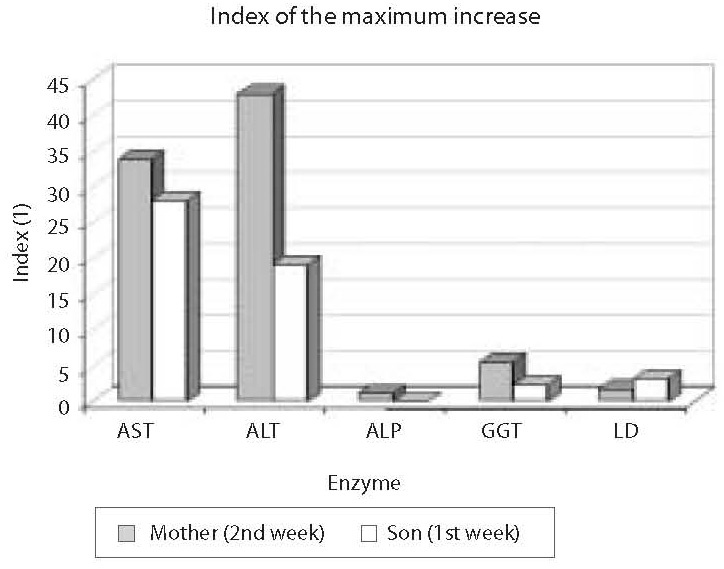 We report of a mother and a child with pulmonary tuberculosis in whom antituberculosis drug administration at the very beginning of treatment resulted in liver damage. Severe degree of hepatotoxicity in the mother and the child indicate the presence of a possible predisposition for such response during antituberculosis drug therapy, yet we found no related information in the available literature. According to the criteria of the American Thoracic Society, both the mother and the child suffered from severe hepatotoxicity (2). After a temporary discontinuation of therapy, reintroduction of lowered and then increasing drug doses until full dose, the values of the analyzed biomarkers remained during the entire course of treatment within the reference range.
Asymptomatic elevation of the catalytic activity of AST occurs in approximately 16%-20% of individuals administered standard four-drug antituberculosis therapy (12,13). The incidence of hepatotoxicity is more frequent in elderly persons and women, particularly if they suffer from a more severe type of tuberculosis (12). In a previous report of hepatotoxicity of antituberculosis drugs in children, a rise in catalytic activity of liver enzymes was established in half of the children on INH, RIF and PZA therapy, with enzyme activity increase on average lower than twofold (14), which indicates a mild degree of hepatotoxicity. In most patients, asymptomatic elevation of aminotransferase activity resolves spontaneously. Still, if the increase in values is higher than 5-fold (with symptoms or without them), or higher than 3-fold (with symptoms), the therapy should be discontinued. An increase in ALP activity or bilirubin concentration requires immediate therapy evaluation (2). The therapy continues after AST levels return to the values that are lower than 2-fold upper normal limit. RIF therapy is reintroduced first (13), and then, after a week, AST activity is checked. If AST activity has not risen, INH is introduced in the therapy. Provided that there is no rise in AST activity after a week, PZA can also be included in the therapy. According to this protocol, the levels of liver enzymes and bilirubin did not increase any more in our patients, and the therapy could be administered until complete recovery. Pereira et al. (15) described the occurrence of hepatic lesions during administration of antituberculosis drugs in a 5-month-old infant in whom hepatotoxicity occurred already on day 5 after INH, RIF and PZA administration. In children with the average age of 7.6 years, Corrigan et al. (16) described maximum twofold elevation of liver enzymes during the second week of antituberculosis drug therapy. These authors believe that the therapy should be temporarily discontinued only if jaundice occurs, and that - in case of asymptomatic elevation of enzyme activity - enzyme levels will spontaneously return to baseline values even without therapy discontinuation.
It may be assumed that hepatotoxicity in the mother and the child was caused by INH or its metabolites. We found no information in the available literature on such severe hepatotoxicity. Literature search commonly resulted in records of mild (14,16) or moderate (17) degree of hepatotoxicity. In children with moderate liver damage, INH fast acetylators demonstrated on average 3-fold increase in AST activity and 6-fold increase in ALT activity, while in INH slow acetylators AST activity was 7-fold and ALT activity was 18-fold that of the initial levels (17).
The shortcoming of this report on hepatotoxicity is the fact that NAT polymorphism and GST and CYP2E1 were not investigated, which should be done in a future study. The results demonstrated that the activity of liver enzymes should be monitored every week during initial weeks of antituberculosis drug administration in order to detect their possible hepatotoxicity and perform prompt therapy evaluation.