[2] Department of Pulmonology and Allergology in Infants and Small Children, Srebrnjak Children’s Hospital, Reference Center for Clinical Allergology in Children of the Ministry of Health, Zagreb, Croatia

[4] Department of Medical Biochemistry and Hematology, School of Pharmacy and Biochemistry, University of Zagreb, Zagreb, Croatia

Introduction: A case of transient hyperphosphatasemia in a 21-month-old boy diagnosed with recurrent wheezing during acute respiratory infection is described.

Results: During hospital treatment, increased catalytic activity of alkaline phosphatase was recorded (4109 U/L on day 1 and 2156 U/L on day 6). On control examination on day 27 of hospital admission, the value decreased to 505 U/L. Electrophoretic separation of alkaline phosphatase isoenzymes demonstrated a band faster than the hepatic-osseous isoenzyme, a fast anodal form.

Conclusion: A marked increase in the alkaline phosphatase catalytic activity with typical electrophoretic isoenzyme pattern persisting for several weeks points to transient hyperphosphatasemia. Additional unnecessary diagnostic work-up can be obviated by timely recognition of the phenomenon.

Alkaline phosphatase, orthophosphate-monoester-phosphohydrolase (ALP; EC 3.1.3.1.) is a group of hydrolases with optimal activity in alkaline range (pH 9.8-10.5). ALP includes tissue nonspecific isoenzyme (liver-bone-kidney), intestinal, placental and placental-like isoenzyme which is expressed in the testes, thymus and lungs. Atypical or multiple forms of ALP are of non-gene origin and occur in particular pathologic states (1,2). Because of bone growth, the catalytic activity of ALP is greater in childhood and puberty than in adults. ALP catalytic activity can be extremely increased, up to 20-fold upper reference limit for age, in serum of infants and children, even in the absence of hepatic or bone disease (2,3). Transient hyperphosphatasemia (TH) in infants and children or benign transient hyperphosphatasemia (BTH) was first described in 1954 (3), and in Croatia in 1986 (4). As these children show no clinical signs of metabolic bone or liver disease, TH is incidentally detected on laboratory work-up for some illnesses.

The aim is to present a case of TH and to remind of hyperphosphatasemia as a benign phenomenon where additional diagnostic procedures can be avoided. To the best of our knowledge, this is the first report of TH in a child with recurrent wheezing during acute respiratory infection.

Electrophoretic separation of ALP isoenzymes was done on agarose gel (Hydragel 7/15 ISO-PAL gels, Sebia Products, Issy-les-Moulineaux, France) with the use of the Hydrasis automated electrophoresis system, Hydrasis 2 densitometer (Sebia System, EVRY Cedex, France) with serum lectin pretreatment (6). Prior to application onto the agarose, the sera were diluted to approximately the same value of ALP catalytic activity.

A 21-month-old male child was admitted to Department of Pulmonology and Allergology in Infants and Small Children for the management of acute respiratory infection with recurrent wheezing. The child had a 6-month history of frequent respiratory infections with recurrent wheezing and a finding of elevated total IgE concentration (IgE 151.8 kU/L; the upper limit of the reference range for age is 38.6 kIU/L (7)), treated with short-acting (salbutamol) and long-acting (fluticasone propionate) bronchodilators on outpatient basis. On admission, the child was afebrile, pale, mildly dyspneic, respiration rate 35/min (mild respiratory distress); expiration difficult and prolonged, with bilateral rales. The heart and abdomen were normal. Chest x-ray showed no pathologic findings. The patient was treated with bronchodilators, glucocorticoids, salbutamol inhalation and respiratory kinesitherapy. After six days, the patient was discharged with normal clinical status for home care and recommended therapy with a long-acting inhalation bronchodilator. The patient presented for control examination on day 27 of the disease onset, but failed to come for second control. The patient’s mother signed the informed consent form prior to hospitalization and diagnostic work-up was performed according to the standardized procedure, in line with ethical principles, Helsinki Declaration on Human Rights from 1975 and Tokyo amendments from 2004 (8).

Laboratory findings recorded during hospitalization and a short period of home care are presented in Table 1. Catalytic activity of ALP decreased from day 1 to day 6 to 51% and over the next 21 days to 12% of the initial value, i.e. near the upper limit of the reference range for age. Electrophoretic separation of ALP isoenzymes is presented in Figure 1. Native serum samples showed altered electrophoretic isoenzyme motility, i.e. rapid anodal (faster than the hepatic-osseous-placental area) and slower anodal (moving in the hepatic-osseous-placental area) bands. The change was especially pronounced in serum samples collected on day 1 and day 6 of treatment (lanes 1 and 2). Upon lectin treatment, the rapid anodal form was even more pronounced, along with separation of the remaining fractions (lanes 1’ and 2’). The rapid form catalytic activity determined by electrophoretic separation was 1422 U/L on day 1, 802 U/L on day 6 and 76 U/L on day 27. When the ALP catalytic activity decreased to the upper reference limit, isoenzyme electrophoresis assumed the characteristics of normal pediatric serum (lanes 5 and 7), especially upon treatment with lectin (lanes 5’ and 7’). The rapid anodal form diffusely associated with the hepatic form was less pronounced but still present (lanes 3 and 3’). In control samples, the hepatic-osseous and placental-like isoenzymes (lane 5) and intestinal isoenzyme (lane 7) were observed. 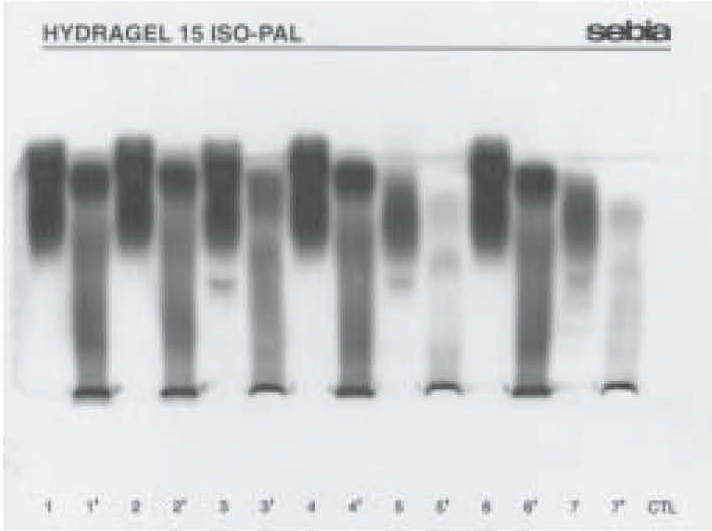 The following criteria are used on making the diagnosis of transient hyperphosphatasemia: age below 5 years; various symptoms such as respiratory infections, diarrhea, vomiting; absence of clinical and biochemical signs of liver and bone disease; increased ALP level, 3- to 50-fold upper limit of the age specific reference range; elevated activity of osseous and/or hepatic isoenzymes; and return to normal levels within 4 months (3).

Prior to admission, our patient had a 6-month history of recurrent respiratory infections, most probably of viral etiology. Various pathologic states such as viral infection have been postulated to modify the rate of ALP molecule sialinization, thus reducing the enzyme clearance (17). Other authors report the appearance of atypical ALP of electrophoretic motility in the rapid a2 or a1/a2-globulin area (10,12). Studies of the catalytic properties of atypical ALP form in transient hyperphosphatasemia suggest the hepatic form with excess sialic acid, although enhanced sialinization of other proteins has not been detected. Treatment with sialidase or lectin is not efficient enough to translate the atypical hepatic ALP form into normal hepatic ALP form (10). In the study patient, electrophoretic separation of ALP isoenzymes yielded a strong band that could be characterized as an atypical fast anodal form faster than the hepatic-osseous isoenzyme. Relative percentage of the rapid anodal form, determined by densitometry in the lectin processed samples collected on day 1 and day 6 was 35% and 37%, respectively. The decrease in total ALP activity was accompanied by a changed electrophoretic pattern in the sample obtained on day 27, when the percentage of the rapid anodal form decreased to 15%. Unfortunately, the child did not present for the second check-up, so the catalytic activity of ALP and ALP isoenzymes, presumed to have decreased to the reference range as described elsewhere (18), could not be determined again. The inadequate sample volume was an additional limitation of the study. Although serum protein electrophoresis is a reliable method for ALP isoenzyme differentiation, additional studies like catalytic properties or stability of ALP isoenzymes could not be performed.

In conclusion, transient hyperphosphatasemia should be considered in case of an incidental finding of high catalytic activity of ALP in early childhood during acute respiratory or intestinal infection, thus obviating additional unnecessary diagnostic work-up. If the levels normalize within four months, there is no need for additional testing.