The aim of this article is to highlight practical recommendations based on our experience as reviewers and journal editors and refer to some most common mistakes in manuscripts submitted to Biochemia Medica. One of the most important parts of the article is the Abstract. Authors quite often forget that Abstract is sometimes the first (and only) part of the article read by the readers. The article Abstract must therefore be comprehensive and provide key results of your work. Problematic part of the article, also often neglected by authors is the subheading Statistical analysis, within Materials and methods, where authors must explain which statistical tests were used in their data analysis and the rationale for using those tests. They also need to make sure that all tests used are listed under Statistical analysis section, as well as that all tests listed are indeed used in the study. When writing Results section there are several key points to keep in mind, such as: are results presented with adequate precision and accurately; is descriptive analysis appropriate; is the measure of confidence provided for all estimates; if necessary and applicable, are correct statistical tests used for analysis; is P value provided for all tests, etc. Especially important is not to make any conclusions on the causal relationship unless the study is an experiment or clinical trial. We believe that the use of the proposed checklist might increase the quality of the submitted work and speed up the peer-review and publication process for published articles.

The Editors at Biochemia Medica are committed to continuously improve the quality of the articles published in the Journal. This may be achieved by helping authors to improve their manuscripts through peer-review process. One of the major problems in manuscripts submitted to Biochemia Medica is the quality of the data analysis and data presentation. The improper use of statistical methods is unethical because it leads to biased results and incorrect conclusions. Moreover, this is a substantial waste of time and money. The most common errors occurring in Biochemia Medica have already been reported in this Journal (1).
To improve the quality of data analysis and reporting in manuscripts submitted for possible publication, the increasing number of journals have issued statistical guidelines and have also introduced the statistical editors who are responsible for statistical peer-review (2-4).
The aim of this article is to provide practical recommendations for authors who wish to submit their work to Biochemia Medica. It should however be made clear that this article by no means provides a substitute for a comprehensive textbook in biostatistics. On contrary, readers are encouraged to take this only as a reminder and to consult a textbook for a more comprehensive coverage of the issues mentioned in this article.

Are key results included in the Abstract?

One of the most important parts of the article is the Abstract. Authors quite often forget that Abstract is sometimes the first (and only) part of the article read by the readers. As stated in the Instructions to authors, Abstract for all original articles must be structured into following four headings: Introduction, Materials and methods, Results and Conclusions. Furthermore, Abstract must be comprehensive and provide key results of the study. If not done so already in the Materials and methods section of the Abstract, authors certainly need to make sure that readers are informed about the number and size of the studied groups. All estimates need to be presented with the appropriate summary measures, confidence intervals and P values (where applicable). For all tested differences and associations, the level of significance must be provided.
Below is the example for poorly written Results section of the Abstract:
Results: The concentration of New BioMarker™ in patients with acute myocardial infarction was higher than in healthy controls (P < 0.05). There was a significant correlation of New BioMarker™ with serum copeptine concentrations.
The following is the example for well written Results section of the Abstract:
Results: There were 250 patients with acute myocardial infarction and 232 healthy controls. The concentration of New BioMarker™ was higher in patients than in healthy controls (7.3 ± 0.6 mmol/L vs. 5.4 ± 0.5 mmol/L, respectively; P = 0.002). New BioMarker™ was associated with serum copeptine concentration (r = 0.67, P = 0.026).

Key points to keep in mind when writing the Results section

The next section that should be carefully inspected prior of submitting, to detect for any possible flaws and errors in data analysis and presentation is Result section.
When results are reported, authors need to make sure that:
This is, unfortunately, not always the case. Authors quite often fail to describe their data with adequate precision and by using the appropriate summary measures. Quite often, it is not clear from the text whether the assumptions for tests were met and have appropriate tests been used in the data analysis. This part of the manuscript is crucial and needs to be written with great attention and care. To help our readers to avoid all possible mistakes below we summarize some key points they need to keep in mind when writing Results section of their manuscripts.

Is the descriptive analysis adequate?

When describing numerical data, it is essential that proper measures of central tendency and dispersion are used. Before presenting the data, normality of the distributions needs to be tested. Generally speaking, if the data are normally distributed and if sample size is ≥ 30, parametric summary measures (mean and standard deviation) may be used. However, if sample size is small (N < 30) or if data are not normally distributed, authors are advised to use median and interquartile range (IQR), from first (Q1) to third quartile (Q3) or some other measures, like range. We wish to point out that there is no uniformly accepted opinion about the cut-off number for the sample size, but according to Dawson and Trapp, samples under 30 subjects per group are considered small and require non-parametric statistics (5).
Since SEM (standard error of the mean) is not the measure of dispersion, its use is not allowed when summarizing and describing the data. Using SEM instead of standard deviation is one of the ten most common mistakes occurring in the manuscripts submitted to biomedical journals (6).
More extensive review on the ways of summarizing and interpreting numerical data has recently been published in this journal within the section Lessons in biostatistics (7) and elsewhere (8).

Are results presented with adequate precision and accurately?

Table 1b. The example for correctly presented results for observations in two groups (groups A and B).

When necessary and applicable, the authors need to make sure to provide the measure of confidence and P value for all their estimates. This is especially important when presenting estimates of diagnostic accuracy, odds ratios, relative risks, regression analysis results etc. In the Tables 2a and 2b, we list some most common examples for flawed and correct presentation of your estimates.
Table 2a. Examples for flawed presentation of results.

Table 2b. Examples for correct presentation of results.

It is noteworthy to mention that AUC is always reported with two decimal places, as well as its upper and lower 95% confidence interval limits.

Were correct statistical tests used for the analysis?

The choice of statistical test is determined by the type of the data and the way they are measured. There are several assumptions that need to be checked prior to the choice of the test:
Depending on the answers to the above listed questions, researcher makes the choice of the statistical test. Common errors are: i) authors did not test for those assumptions prior to the applying the statistical test; or ii) they fail to describe the way the test was selected; or iii) reader is not informed at all about the test used to analyze data in the study.
If data are not normally distributed and/or if sample size is small (N < 30), non-parametric tests should be used.
Tom Lang has reviewed 20 most common statistical errors occurring in biomedical research articles and has provided statistical reporting guidelines to be followed by authors, editors, and reviewers who lack some knowledge about the statistical analysis (6). Listed below are some of the most commonly errors occurring in manuscripts submitted to Biochemia Medica:
If there are three or more groups, authors should use ANOVA or its non-parametric analogue. When testing the data with tests for testing differences between three or more groups (such as ANOVA or Kruskal-Walis test), authors need to make sure to give P value for ANOVA as well as for post-hoc comparisons.
Only if P for ANOVA or Kruskal-Walis test implies that the tested difference among groups is significant, authors may proceed with post hoctest for multiple comparisons. Post hoc test is not done if P > 0.05, when applying tests for testing differences between three or more groups.
Furthermore, what also needs to be stated is the name of the test used for post-hoc comparisons, because different tests have different uses, as well as advantages and disadvantages (10).
Authors need to make sure that all tests used in their work have met the assumptions for their use and this information needs to be provided to the readers in the sections Statistical analysis and Results. More comprehensive review on the choice of the right statistical test has been extensively elaborated in this Journal within the section Lessons in biostatistics (11).

Is P value provided for all tests done in the study?

P value needs to be stated as exact number with three decimal places (i.e. P = 0.027). The use of expressions like NS, P > 0.05, P < 0.05 and P = 0.0000 is strongly discouraged. P should be provided with capital letter and should not be italicized. P < 0.001 is the smallest P value that should be reported. There is no point to provide more than 3 decimals for P, with the exception of some studies when large samples and rare events are studied (12).

Even if correct statistical test was used to analyze the data, mistakes can still occur when authors interpret their results. When interpreting the data and results, authors need to make sure to take into account the a priori stated level of significance. This means that differences may be interpreted as significant, only if P value is below the stated level of significance. Expressions like ‘borderline significant’ are strongly discouraged and will not be accepted.
Furthermore, statements like this are also discouraged:
If statistical significance was not observed, data should not be reported and discussed as significant. Moreover, no matter how obvious, difference should not be discussed unless the authors have tested for its statistical significance. Unfortunately, this often occurs when differences between two or more measures of diagnostic accuracy (AUC, sensitivities and specificities), correlation coefficients and odds ratios are being discussed.

Conclusions on the causal relationship

Herein we provide the short checklist for all future authors who wish to submit their articles to Biochemia Medica (Table 3). We strongly encourage authors to check the items from the checklist prior to submitting their work for potential publication in our Journal. The aim of the checklist is to remind authors to some most important issues related to their data analysis and presentation. More extensive checklist for editing and reviewing statistical and epidemiological methodology in biomedical research papers, has already been published in this Journal with the aim to assist statistical reviewers and editors as well as to authors when planning their study and preparing their manuscripts (14).
Table 3. Checklist for authors who submit their work to Biochemia Medica. 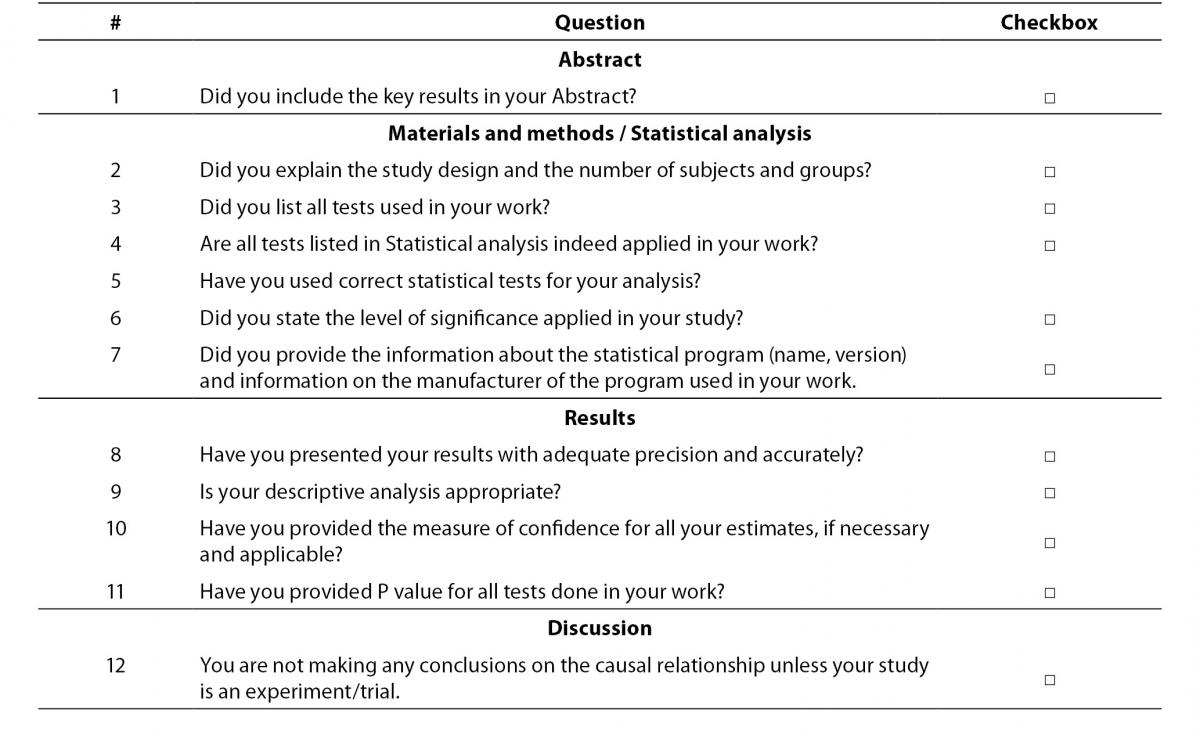 Authors are encouraged to browse through some older issues of this Journal for some more comprehensive coverage of some specific statistical terms and related issues. The point of this article was to provide a more general and basic guidance and alert authors to some important key factors that need to be remembered when writing an article. We invite all future authors to read this article and complete the checklist prior to submitting their work to our Journal. This will increase the quality of the submitted work and speed up the peer-review and publication process for published articles.