Introduction: Non insulin dependent diabetes mellitus is the most common type of diabetes. Genetic factors, lipid profiles, hypertension are potential risk factors for diabetes mellitus. Adenosine binding cassette transporter proteins 1 (ABCA1) plays a role in cholesterol metabolism, especially high density lipoprotein (HDL-cholesterol). There are multiple mechanisms by which HDL-cholesterol can be atheroprotective, it is clear that the relative activity of ABCA1 plays a major role. We aimed to investigate association of ABCA1 C69T gene polymorphism with lipid levels in Turkish type 2 diabetic patients.
Materials and methods: After isolation of DNA by ethanol precipitation we determined ABCA1 gene polymorphism by using polimerase chain reaction - restriction fragment lenght polymorphism (PCR-RFLP) method in 107 type 2 diabetic patients and 50 healthy controls.
Results: We have observed that the frequency of TT genotype is significantly higher in healthy controls compared to patients (14% vs. 3%; P = 0.008). Also frequency of T allele was higher in controls than in patients (34% vs. 21%; P = 0.020; OR (95% CI) = 0.52 (0.30-0.88)). There was no association of lipid levels and ABCA1 C69T polymorphism subgroups.
Conclusion: We have found significantly higher frequency of both T allele and genotype in control group when compared to patients that made us think that T allele may be a protective factor against diabetes mellitus. But, we could not find a relationship between genotypes and lipid concentrations in our two groups. Larger studies will help us to understand the relationship between ABCA1 C69T genotype and lipid parameters in diabetes mellitus.

Type 2 diabetic patients exhibit dyslipidemia with high triglyceride and low high density lipoprotein (HDL-cholesterol) concentration which are the underlying pathology behind cardiovascular disease (1,2). Numerous population studies have shown an association between plasma lipid levels and coronary artery disease risk (3,4). Moreover, epidemiological studies suggest that the risk of developing coronary heart disease for patient with diabetes mellitus is 2–4 times higher than their counterparts without diabetes (1). Some experimental studies suggested that accumulation of cholesterol in islets causes to reduced glucose-stimulated insulin secretion (GSIS), and impaired glucose tolerance in mice. Therefore elevated cholesterol levels may be a risk factor for glucose intolerance and diabetes (5).
Adenosine binding cassette transporter proteins 1 (ABCA1) plays a role in cholesterol metabolism, especially HDL-cholesterol. Previous investigations showed that homozygous mutations in the ABCA1 gene cause Tangier disease and heterozygosity causes for familial hypoalphalipoproteinemia. There are multiple mechanisms by which HDL-cholesterol can be atheroprotective, it is clear that the relative activity of ABCA1 plays a major role. Genetic and molecular biology studies have suggested that low plasma HDL-cholesterol concentration in many individuals reflect an impaired ABCA1 pathway, which would also promote the accumulation of cholesterol in tissue macrophages. Albrecht et al. showed that ABCA1 gene expression was significantly elevated in atherosclerotic plaques (6). Porchay et al. suggested that ABCA1 gene polymorphisms modulate HDL-cholesterol concentrations in an interaction with body mass index (BMI), and thus, they might influence cardiovascular risk in the general population (7). In addition, ABCA1 R230C polymorphism was shown to be associated with a 4-fold occurrence of diabetes and it may have an important role in maintaining glucose-mediated insulin secretion (8). Salinas et al. reported that the absence of ABCA1 led to cholesterol accumulation within the beta cell plasma membrane, suggesting that ABCA1 may be not only a determinant of HDL-cholesterol but also a link among diabetes, metabolic syndrome and atherosclerosis (9). In another study, the authors have demonstrated that high glucose can suppress the mRNA expression of ABCA1 in mouse primary peritoneal macrophages (10).
There were fewer investigations about the role of ABCA1 C69T polymorphism (rs1800977) in lipid related disorders such as diabetes, cardiovascular disease etc. According to these knowledge, we aimed to investigate the relationship between ABCA1 C69T gene polymorphisms and lipid concentrations in Turkish type 2 diabetic patients.

Our investigation was a case-control study.
The patient group consisted of 107 patients (median = 56 years; min-max = 25-85 years; 71 females and 36 males) with type 2 diabetes. The patients were recruited from Department of Internal Medicine, Haseki Training and Research Hospital between in the period from 2009 to 2011. Patients were diagnosed with diabetes mellitus based on the fasting blood glucose concentration (> 7 mmol/L) (11). Systemic arterial hypertension was considered to be present if the SBP was > 130 mm Hg and/or DPB was > 90 mm Hg.
The control group was selected from patients attending the general surgery and orthopedic clinics of the same hospital and who were treated for trauma. BMI (weight in kilograms divided by the square of the height in meters) values were calculated retrospectively and categorized according to World Health Organization recommendations (12). The smoking status of an individual was assigned ‘yes’ if they were smoking currently or had given up < 3 months previously. The control group was selected from patients without type 2 diabetes and with negative family history of diabetes mellitus. It consisted of 50 individuals (median = 49 years; min-max = 29-85 years; 17 females and 33 males).
This study was approved by the Ethical Committee of Istanbul University, The Istanbul Faculty of Medicine. All of participants, after giving written informed consent, completed a structured questionnaire in order to collect demographic data.
Determination of biochemical parameters
After overnight fasting, blood samples were drawn in plain tubes (Vacuette, Greiner Labor technik, Germany). One plain tube was used for each subject. The samples were centrifuged for 10 min at 1,500 × gat room temperature, followed by the removal of serum. Serum was stored at -20 °C, until concentrations of triglycerides, total cholesterol and fasting blood glucose were determined by using Hitachi 717 autoanalyzer (Tokyo, Japan). Concentrations of HDL-cholesterol were measured subsequently after precipitation of ApoB-containing lipoproteins with phosphotungstic acid/MgC12. LDL-C concentration was calculated using the Friedewald formula when the triglyceride concentration was < 4 mmol/L; otherwise, LDL-C concentration was measured directly using the Hitachi 717 autoanalyzer (Tokyo, Japan) (13,14). 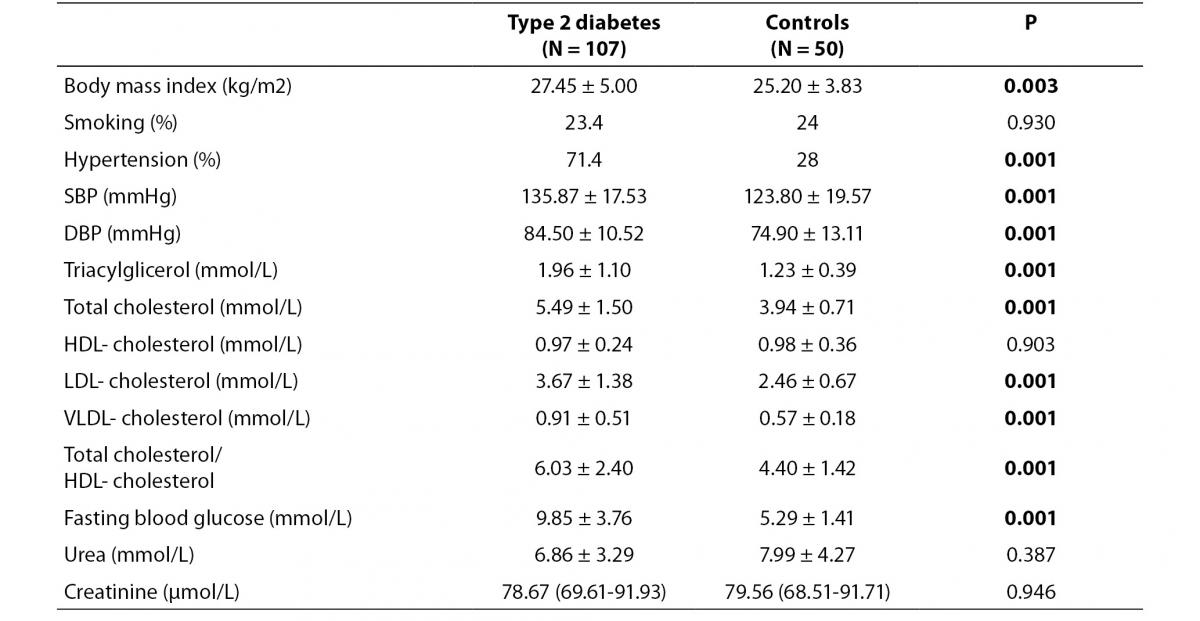