Introduction: The measurement of cardiospecific troponins is pivotal in the diagnostic and prognostic approach of patients with suspected acute myocardial infarction (AMI). However, no information is available on the commutability of results between the novel highly-sensitive (HS) troponin T (TnT) and I (TnI) immunoassays.
Materials and methods: The study population consisted in 47 consecutive patients presenting at the emergency department (ED) of the Academic Hospital of Parma with suspected AMI. TnI was measured with the novel prototype Beckman Coulter HS-AccuTnI immunoassay on Access 2, whereas TnT was measured with the Roche HS-TnT immunoassay on Cobas.
Results: Eight out of the 47 patients (17%) were finally diagnosed as having an AMI. The overall correlation between TnT and TnI for total patient group was acceptable (r = 0.944; P < 0.01). Nevertheless, when the analysis of data was carried out in separate groups according to the final diagnosis of AMI, two different equation results were obtained, i.e., HS-TnT = HS-AccuTnI x 0.349 + 20 (r = 0.823; P < 0.01) in non-AMI patients, and HS-TnT = HS-AccuTnI x 0.134 + 67 (r = 0.972; P < 0.01) in those with AMI.
Conclusions:This study suggests the existence of two biological relationships between TnI and TnT in plasma, depending on the source of release from the myocardium. Moreover, the non-commutability of data between HS-TnT and HS-AccuTnI jeopardizes the clinical decision making, makes it impossible to calculate the delta or reference change value using the two biomarkers and to finally establish a reliable kinetics of troponin release from the injured myocardium.

The measurement of cardiospecific troponins is a mainstay in the diagnostic and prognostic approach of patients with suspected acute myocardial infarction (AMI). Reliable evidence has been gathered about an excellent correlation between the upper measuring range of the new, highly sensitive (HS) Troponin T (TnT) immunoassay and the values obtained for the former 4th generation immunoassay (1). No information has however been provided on the commutability of results between TnT and troponin I (TnI) immunoassays, to the best of our knowledge. Therefore, the aim of this study was to compare the data obtained by the Roche highly sensitive Troponin T (HS-TnT) (Roche Diagnostics GmbH, Basel, Switzerland) and the novel prototype HS-AccuTnI (Beckman Coulter Inc., Brea CA, USA) immunoassays in patients admitted at the emergency department (ED) with suspected AMI.

The study population consisted in 47 consecutive patients presenting at the ED of the Academic Hospital of Parma with suspected AMI over one week, from the 13th to the 20th of June, 2011. Samples were immediately collected on patient admission in vacuum tubes without additive, centrifuged at room temperature and 1500 x g, and immediately tested. TnI was measured with the novel prototype HS-AccuTnI immunoassay, on Access 2 (Beckman Coulter Inc.). The 99th percentile reference limit, the optimal imprecision (i.e., total coefficient of variation ≤ 10%), and limit of detection (LOD) are 8.6 ng/L, 8.6 ng/L and 2.1 ng/L (2). TnT was measured with the Roche HS-TnT immunoassay on Cobas (Roche Diagnostics GmbH). The 99th percentile reference limit, the optimal imprecision and LOD are 14.0 ng/L, 13.0 ng/L and 2.0 ng/L (3). Results were finally expressed as median and 95% Confidence Interval (95% CI). The results of HS-TnT and HS-AccuTnI immunoassays were analyzed by linear regression analysis and Pearson correlation coefficient (r). 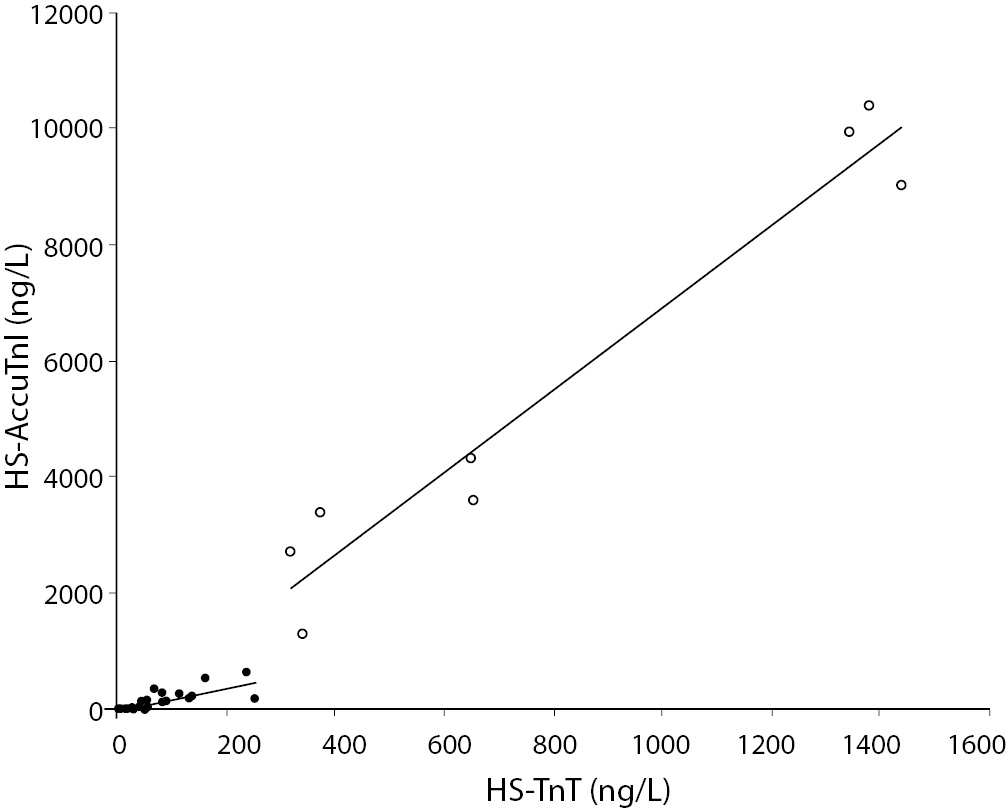 This is the first investigation assessing the correlation of HS-TnT with the novel HS-AccuTnI in patients with and without AMI, to the best of our knowledge. In the latter category of patients, this was especially allowed by the remarkably improved analytical sensitivity of these novel methods. Although our study is relatively small, the results attest that two rather different biological relationships exist between TnI and TnT in plasma, depending on the source of release of these proteins from the myocardium. In the former instance, which is characterized by the physiological renewal of the cardiomyocytes or mechanical stretch of cardiomyocytes due to pressure or volume overload in subjects without AMI (5), the concentration of TnT in plasma is nearly one third of that of TnI. Conversely, after irreversible ischemic myocardial injury and necrosis, the concentration of TnI in plasma becomes nearly 10-time higher than that of TnT. It is thereby misleading to perform correlation analysis after mixing AMI cases and controls. This observation has also important clinical implications. Due to the increasing diffusion of the “hub and spoke” network model in healthcare, which is also characterized by centralization of intensive therapy/intensive treatment cardiology units (6), the first sample for troponin testing might be drown in a peripheral ED, from where critical patients might then be transferred to the reference hospital of the area. Since in several national settings the peripheral and the core laboratories might use different troponin immunoassays (i.e., HS-TnI versus HS-TnT), our results clearly attest that the non-commutability of data jeopardizes the clinical decision making based on results of different immunoassays and, even more importantly, makes it impossible to calculate the delta or reference change value between the first and the following troponin results (7), and finally establish a reliable kinetics of troponin release from the injured myocardium.