The 76 amminoacid N-terminal proB-type natriuretic peptide (NT-proBNP) has been proposed as a marker for evaluating and monitoring cardiac abnormalities characterized by myocardial wall stress (1). Strenuous exercise may generate transitory ischemia, myocardial stress, and diastolic left ventricular dysfunction, resulting in increased production of NT-proBNP suggestive of incipient heart disease.
Increased NT-proBNP levels after physical exercise in endurance athletes (2,3) and after heavy physical exercise in professional athletes has been described (4,5). In appropriately trained athletes, the production of this peptide is lower at rest and exercise-induced increases remain below abnormal limits (6,7). NT-proBNP concentrations in rugby players, for example, were not substantially affected by post-training recovery (passive, active recovery followed by cold-water immersion, cold-water immersion followed by active recovery) (6).
The rationale for the use of NT-proBNP, instead of mature BNP, as marker for cardiac dysfunction resides in their different half-life (90-120 versus 18 min) (8). The finding that NT-proBNP, but not intact BNP is augmented after endurance sport performance (9) is a consequence of the different life spans of the molecules.
Exercise-induced production of NT-proBNP needs to be distinguished from abnormal increases due to heart damage. NT-proBNP is a reliable diagnostic and prognostic marker in patients with suspected heart failure. Chronic elevations, along with those of other natriuretic peptides, aid in identifying and monitoring cardiac dysfunction. Differently, exercise-induced NT-proBNP changes, particularly in well-trained professional athletes, reflect an acute response to altered hemodynamics, regional wall-motion abnormalities, and exercise-induced transitory myocardial wall ischemia (10). Furthermore, exercise-induced NT-proBNP production in such athletes very likely stems from a cytoprotective mechanism (2,11).
The mechanism underlying its release has not been elucidated. Systemic inflammation following strenuous exercise may stimulate the release of NT-proBNP into the circulation (11).
Cardiac damage was inferred from high NT-proBNP concentrations measured in 60 non-professional athletes after a marathon (7): 60% of the recreational runners had increased troponin T (TnT) and NT-proBNP levels; left ventricular size and ejection fraction were unchanged but left ventricular compliance was reduced; changes in biochemical signs of cardiac damage were more pronounced in the runners who had trained at low training workloads. The study results serve as a reminder that appropriate preparation is mandatory to protect athletes against potentially harmful elevation of cardiac biomarkers and the risk of cardiac dysfunction associated with endurance performance (7).
Troponins (T and I) are commonly used diagnostic markers for cardiac ischemia and infarction. Their relevance for sports medicine was highlighted in a recently published critical review of studies on increased troponin levels after prolonged strenuous physical activity (12). With the advent of assays with high analytical sensitivity, also known as highly sensitive troponin (Hs-Tns) tests, the negative predictive value of troponin testing has improved, but its clinical specificity has substantially decreased (13).
Evaluating Tns release after prolonged strenuous exercise poses a challenging problem for clinical chemistry. Several hypotheses have sought to explain the release of cardiac proteins, focusing mainly on increased membrane permeability and leakage of the unbound cytosolic pool, which comprises only a small part of the total pool of cardiac Tns (14). Tns loss due to higher membrane permeability and the formation of “blebs” (15), i.e., membrane evaginations possibly providing the pathway for protein release, could explain the co-existence of serum Tns in a disease state and in the absence of myocardial dysfunction (16). Transient ischemia, which may occur during exercise, would not normally be sufficient to induce irreversible membrane injury: the blebs are reabsorbed or released into the circulation, where low and short-lasting amounts of Tns detectable with the new highly sensitive assays can be measured. In permanent damage, due to lack of reoxygenation, the blebs collapse and are not shed into circulation; subsequently, high amounts of Tns are released, with myocell necrosis and lysis, a feature typical of myocardial infarction.
Numerous studies utilizing last-generation Tns assays have been performed on athletes: runners (21 studies); triathletes (one study); and basketball players (one study) (12). Only one study involved 91 non-professional cyclists participating in a cycle-touring event (206 km) (17); in 43% of the cyclists, TnI exceeded the upper reference limit (URL) already at 20 min post-exercise.
Biomarkers for cardiac overload and damage have been studied in single, one-day, and ultraendurance events. A study published in 1996 and involving endurance athletes in a prolonged stage race used a now outmoded TnT assay which was affected by interference from skeletal muscle proteins. However, cardiac TnT (cTnT) was found in the serum of only 5 athletes, repeatedly in some cases, but always below the cut-off values for myocardial ischemia. On the basis of the behaviour of creatine kinase isoenzyme MB and, above all, of cTnT, it was concluded that heavy-endurance exercise repeated daily for 22 days was unable to induce permanent heart damage by acute myocardial injury in top athletes (18).
The study of biochemical parameters of cardiac damage is crucial for defining their behaviour after endurance, strenuous and continuous exercise and to avoid misinterpreting elevated serum levels. Equally important is setting cut-off values in endurance athletes to avert misrecognition of signs of myocardial overload or frank pathology.
Evaluating cardiac response is essential for improving our understanding of the physiology of endurance. Here we report on the changes in NT-proBNP and Hs-TnT in relation to energy expenditure in professional athletes during a 3-week staged cycling race, a universally accepted model of strenuous exercise.

This prospective, non-comparative interventional study involved 9 professional cyclists from the Liquigas-Cannondale professional cycling team. All subjects had participated in the 2011 Giro d’Italia and were followed during the duration of the race from 8 through 29 May 2011.
The mean completion time for the cyclists was 86:47:29 h (range, 84:12:10-88:15:51 h) with a mean speed of 35.7 km/h. The median age was 26 years (range, 24–33). Height, weight and body-mass index (BMI) were measured the morning before the start of each stage under fasting and rest conditions (Table 1). Diet was strictly controlled by team physicians.
Table 1. Anthropometrical measurements recorded at the three time-points. Measurements are expressed as median and distribution range (5th – 95th percentile). The different superscripts denote statistical significance at P < 0.05.

Three subjects received non-steroidal anti-inflammatory drugs (NSAIDs) and antibiotics for an upper respiratory tract infection for 5 days during the first week (one case) and during the second week (two cases).The 2011 Giro d’Italia was a “no-needle” race in which therapies and drugs were permitted only for evident illness.
Blood drawings were performed on the day before the start (day -1), on the 12th day (day 12), and on the final day of the race (day 22) (Figure 1).

Figure 1. Race features. The diagram illustrates length (km) and difference in elevation (m) of each stage, day of each stage, days of rest (R), day of blood sampling for this study (), and day of blood sampling for official anti-doping testing (∆).
The total net energy expenditure (kcal) for each stage was derived from the developed power measured with a power sensor (PowerMeter™, SRM GmbH, Jülich, Germany) incorporated into the bike pedal (sensitivity ± 2%). The measures taken during the race are relative to the day before the blood drawings to allow the determination of correlation.
The study design and protocol were approved by the reference ethical committee (ASL Città di Milano); informed consent was obtained from all subjects before the beginning of the study.

Blood drawings
Adherence to pre-analytical recommendations was strictly observed to prevent factors from inadvertently affecting the analytical data. The Union Cycliste Internationale (UCI) and World Anti-Doping Agency (WADA) rules for collection and transport of specimens were followed (19,20).
Blood drawing was performed between 08.00 hrs and 10.00 hrs after overnight fasting with subjects resting in bed for 10 minutes after awaking.
Evacuated tubes (BD Vacutainer Systems, Becton-Dickinson, Franklin Lakes, NJ, USA) were used for the haematological tests (BD K2EDTA 3.5 mL tubes); 7 mL plain tubes (BD SSTII Advance) were used for clinical chemistry tests. Immediately after blood drawing, the tubes were inverted 10 times and stored in a sealed box at 4 °C. Controlled temperature was assured during transport: a specific tag (Libero Ti1, Elpro, Buchs, Switzerland) was used for temperature measurement and recording. The samples were transported by car or train and car: the time elapsed between blood drawing and arrival at the laboratory was 1.30 hrs on day -1, 7.50 hrs on day 12, and 1.30 hrs on day 22. After arrival at laboratory, the K2EDTA-anticoagulated blood was homogenized for a minimum of 15 min with an appropriate mixer prior to analysis, as recommended by the UCI Blood Analytical Protocol (January 2009) and the Athlete Biological Passport Operating Guidelines WADA (January 2010) (19,20). Plain tubes were immediately centrifuged 1300 x g at 4 °C for 10 min and the serum was stored at -80 °C until analysis.
Cardiac indexes
Resting heart rate and diastolic and systolic pressure were measured in the morning with the subjects resting in bed immediately after awakening. The measurements were performed in duplicate at the wrist with an OMRON R3™ (Omron Healthcare Co. Ltd, Kyoto, Japan).
Calculation of plasma volume changes
Repeated measurement of blood parameters in humans during and after physical activity is influenced by changes in plasma volume (21). The percentage variation in plasma volume (DPV%) at consecutive time-points was calculated according to the formula (21):
DPV%= 100 x [(Hbpre / Hbpost) x (1-Htpos t/ 100)/
(1-Htpre / 100)] - 100;
where Hbpre and Hbpost are the pre- and the post-intervention haemoglobin (Hb) concentration, respectively, and Htpre and Htpost are the pre- and the post-intervention haematocrit (Ht) percentages, respectively.
The analyte concentrations measured at days 12 and 22 were corrected for relative changes in PV% using the following equation:
Corrected values = uncorrected values x
[100-DPV(%)] / 100
Measurement of cardiac biomarkers
NT-proBNP and Hs-TnT levels were measured on a Roche Modular Analytics EVO analyzer (Roche Diagnostics, Lewes, Sussex, UK) with Elecsys® proBNP and Elecsys® Hs-TnT, respectively. Both methods are based on sandwich immunodetection.
Serum NT-proBNP measurement had an analytical range of 5-35,000 ng/L, an inter-assay coefficient of variation (CV) of 0.7 to 1.6%, and an intra-assay CV of 5.3 to 6.6%. Serum Hs-TnT measurement had aninter-assay CV of 8% at 10 ng/L and 2.5% at 100ng/L, and an intra-assay CV of 5% at 10 ng/L and 1% at 100 ng/L.The analytical range of this assay is 2 to 10,000 ng/L. 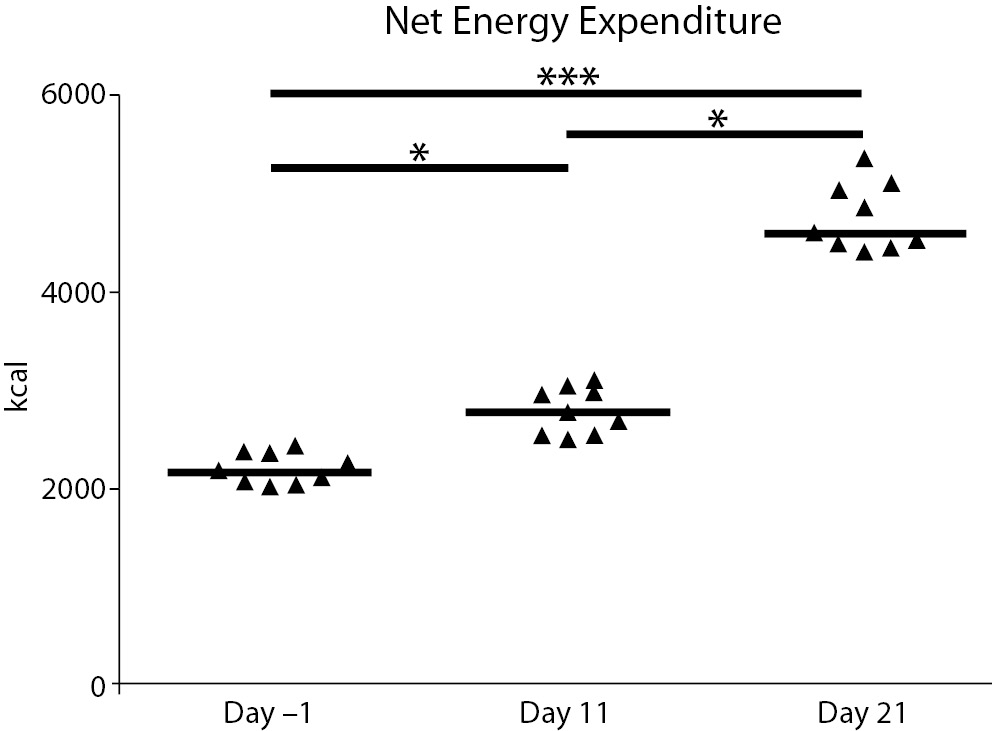 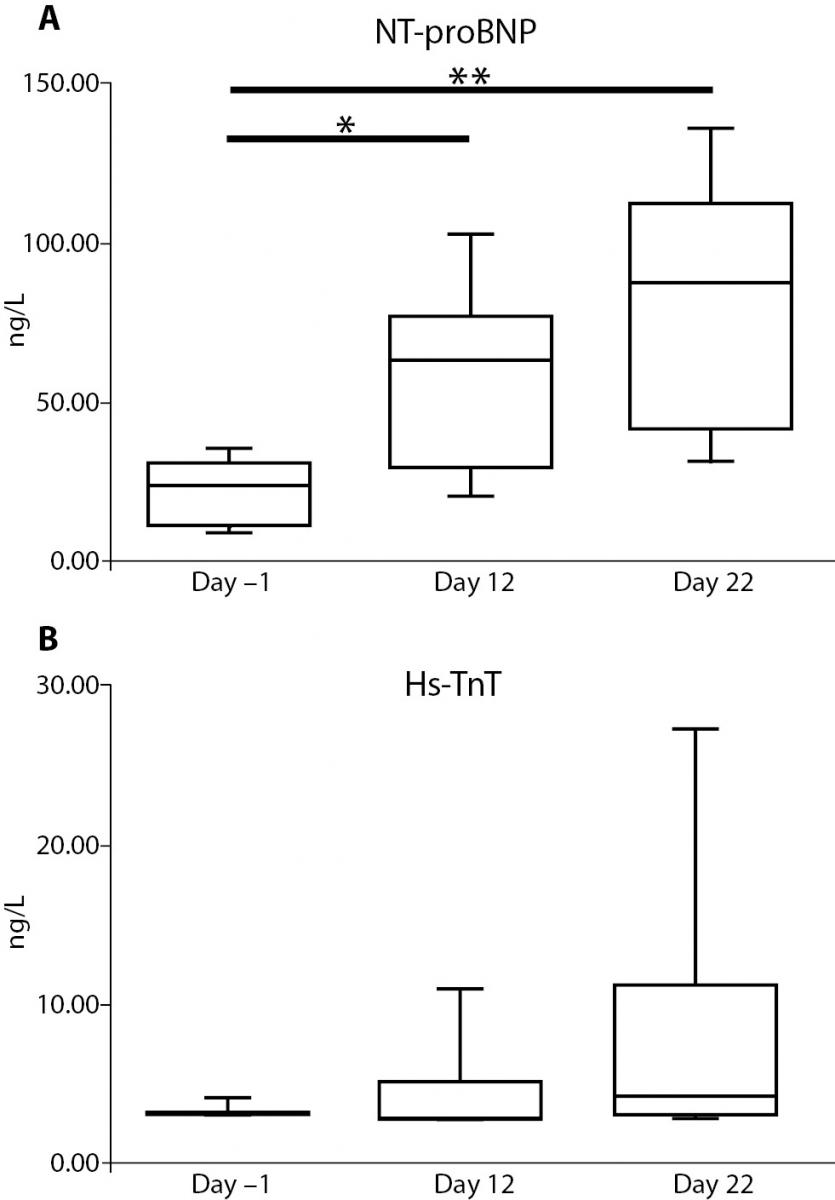 We are grateful to the Liquigas-Cannondale pro-cycling team for their participation and assistance in logistics during the study. We wish to thank Dr Antonino Coco for performing the blood drawings at day 12. We are also indebted with Mr Kenneth Britsch for language editing and with Dr Alessandra Grotta for her help in statistical revision.