Several studies have suggested the possibility of ABO blood groups antigens to participate in pathogenesis of CAD. However, most of these studies reported a significant relationship between ABO blood groups and acute coronary events, especially acute myocardial infarction and sudden cardiac death (1-3). As possible links between ABO blood groups and CAD pathogenesis authors emphasized increased prothrombotic state, higher prevalence of traditional cardiovascular risk factors, and higher level of systemic inflammatory response revealed in patients with different ABO blood groups (4-6). Association between ABO blood groups and chronic CAD has been significantly less investigated.
Atherosclerosis is a chronic inflammatory process in which initiation and progression involve many cell types, such as: platelets, endothelial cells, monocytes, macrophages, and smooth muscle cells (7). Along with their expression on red blood cells, ABO antigens are highly expressed on the surface of endothelial cells and platelets (8). Moreover, blood group antigens are presented on key receptors controlling cell proliferation, adhesion, and motility (9). In this context it should be also mentioned that a series of GWAS have linked the ABO locus to circulating levels of soluble intercellular adhesion molecule-1, soluble P-selectin, soluble E-selectin, and angiotensin-converting enzyme, proteins which blood levels in humans correlate with increased risk of cardiovascular events (10,11). Also, some recent GWASs and their meta-analyses support this potential role for ABO genotypes in modulating circulating levels of total and LDL cholesterol, as well as phytosterols, established causal risk factors for atherosclerotic heart diseases (12). Overall, these associations with cardiovascular risk biomarkers suggest a complex role of ABO in atherosclerotic cardiovascular diseases.
Because initiation and progression of atherosclerosis involve interactions between activated endothelial cells, platelets, and inflammatory cells, we hypothesized that ABO antigens play an important role in cell-cell interactions, which goes along with the presence of traditional cardiovascular risk factors, resulting in different progression of atherosclerosis, and consequently in different extent of CAD in patients with different ABO blood groups.
Previous studies on chronic CAD patients estimated extent of coronary atherosclerosis using single angiographic scoring system (13-16). So far, the only studies that have investigated the association between ABO blood groups and CAD in the Croatian population included patients with an acute myocardial infarction. Although results of first study confirmed the association of non-OO blood group genotypes with an increased risk of thrombosis, neither study demonstrated the association between particular ABO genotypes and an increased risk of myocardial infarction (17,18).
In the present study, we aimed to investigate the relationship between ABO blood groups and the extent of coronary atherosclerosis in patients with chronic CAD using multiple angiographic scoring system. Also, we aimed to compare ABO blood groups distribution in CAD patients and general population and to examine possible differences in traditional risk factors frequency in CAD patients with different ABO blood groups.

An observational study had been conducted from the beginning of 2009 until the end of 2010 in the Department of Cardiology, Split University Hospital Centre, Split, Croatia. In total, 646 patients with chronic CAD (468 [72.4%] males) undergoing coronary angiography had been consecutively enrolled. After noninvasive cardiology testing, coronary angiography was performed in patients with angina symptoms despite optimal medical treatment, as well as in patients who have experienced sudden cardiac arrest, in patients with a high pretest probability of having left main or 3-vessel disease, in patients suspected for CAD who cannot undergo noninvasive testing and in patients with other indications, including patients with uncertain diagnosis on noninvasive testing, high-risk occupational requirements, clinically suspected nonatherosclerotic causes of ischemia or possible vasospasm with need for provocative testing, multiple hospital admissions, or an overriding patient desire for definitive diagnosis of the presence or absence of obstructive disease (19).
The distribution of ABO blood groups in patients were compared with the frequency of the blood groups in healthy controls, which consisted of 651 consecutive blood donors (486 [74.6%] males) with no symptoms and clinical signs of cardiovascular diseases, recruited in study during regular activities in the Department of Blood Transfusion, Split University Hospital Centre, Split, Croatia, from October until December 2010.
The study was conducted according to the principles of the Declaration of Helsinki after the approval from the local ethics committee had been obtained. The informed consent from the participants was not required due to the observational character of the study.

Blood samples had been collected in the morning, before angiographic procedure, after a fasting period of 12 hours. Serum, obtained from a blood collected in a vacuum tube, after centrifugation at 1500 x g for 10 minutes, had been used for TC, LDL-C, HDL-C, TG, and glucose measurement. For ABO blood typing blood sample collected with EDTA had been used.
All laboratory tests were performed immediately after the sample reception in the Department of Clinical Biochemistry, Split University Hospital Center, Split, Croatia.
Plasma concentrations of glucose, TG, TC and HDL-C (after selective precipitation with Immuno AG, Vienna, Austria) were measured by standard enzymatic methods on a Beckman Coulter AU 640 (Beckman Coulter, Tokyo, Japan). LDL-C was calculated using Friedwald equation. If TG concentration was above 3 mmol/L, HDL-C and LDL-C were measured by direct immunoinhibition method (Olympus Diagnostica, Lismeehan, Ireland) and homogeneous assay (Randox Laboratories, Crumlin, United Kingdom), respectively.
ABO blood groups were determined in the Department of Blood Transfusion, Split University Hospital Centre, Split, Croatia, by commercially available hemagglutination techniques (Erytype S ABO Microplates, Biotest, Dreieich, Germany). Typing had been performed within 3 hours from sampling.

Selective coronary arteriography was carried out by Judkins technique using the femoral or radial route, viewing the results under fluoroscopy. The four cardinal epicardial vessels for assessment of stenotic lesions were LM, LAD, such as diagonal branches, RCx, obtuse marginal branches and the RCA. Angiographic scoring was performed by cardiologist who was blinded by the other studies result. For the purpose of this study, percentage of stenoses were graded on the RAO for left coronary injections and LAO for right coronary injections. Coronary angiograms were interpreted visually, analyzed in two orthogonal views, and scored by quantitative assessment of the coronary tree involving three criteria such as: 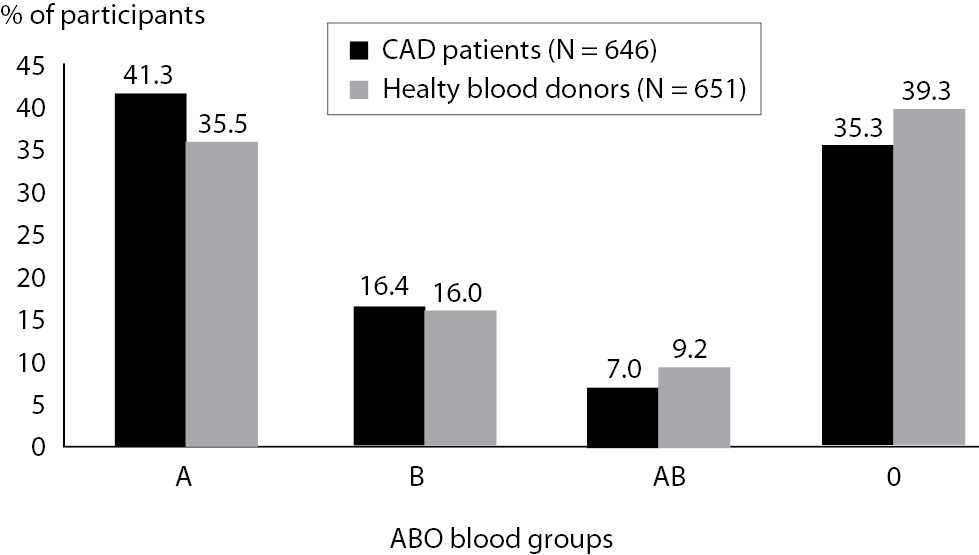 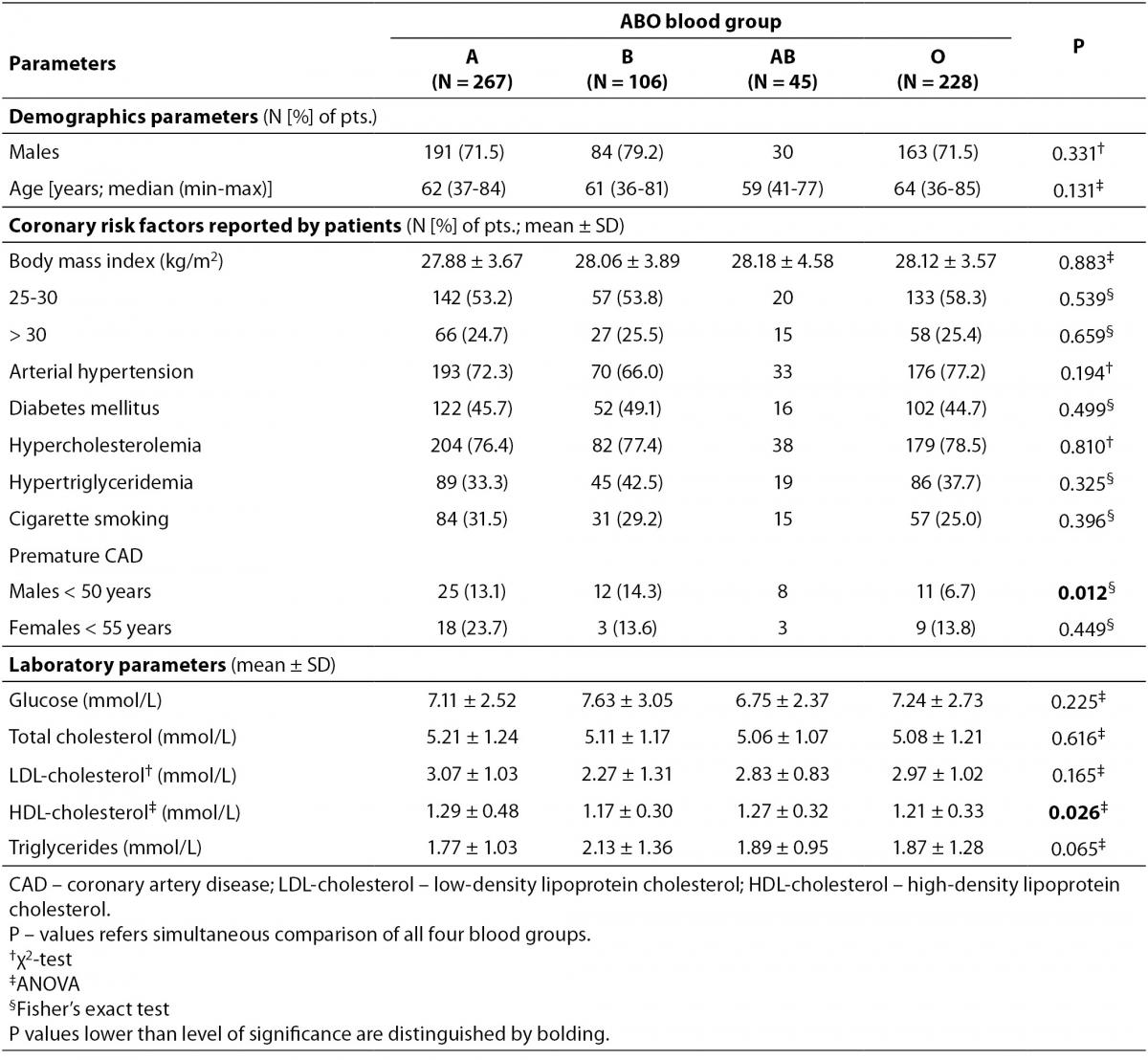 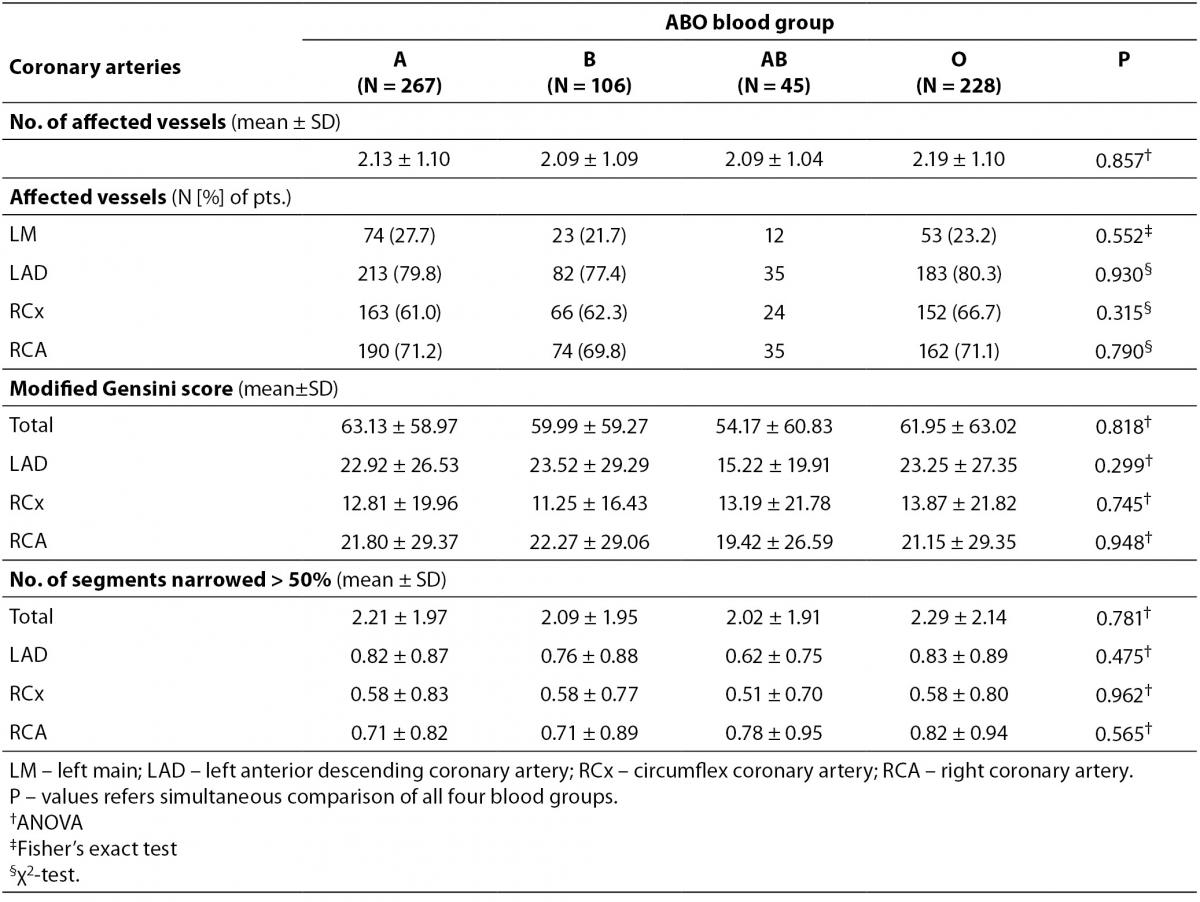