Analytical performance of the Gem® PremierTM 4000 – a comparison study

Gem® PremierTM 4000 (Inc. Lexington, MA, USA) is a new analytical system designed for point-of-care testing (POCT), an analyzer that has appeared on the market lately. The term POCT designates biochemical testing out of a clinical laboratory, in surgical wards, intensive care units, emergency departments, etc. (1). POCT provides rapid findings and effective triage of patients (2,3).
The aim of this study was to compare a new Gem® PremierTM 4000 analyzer with those reported for reference POCT analyzers used until then, before its installation in a decentralized location (in the operating room). The use of a POCT analyzer is important to make fast and reliable clinical decisions while the patient is subjected to operation treatment (regarding transfusion, acid-base management, ventilation and glucose management). In addition, POCT analyzers eliminate time delay due to the transport of samples to the central laboratory and reduce the number of blood samples to measure parameters such as pH, pCO2, pO2, electrolytes, metabolites and hemoglobin/hematocrit (tHb/HCT) (4).
Special attention was given to technology of tHb/HCT concentration measurement on POCT analyzers. There are two types of technology for tHb/HCT measurement. Some POCT analyzers measure HCT using a technology called conductivity and calculate tHb (Gem® PremierTM 3000). An instrument like Ciba Corning 865 measures tHb using the technology called co-oximetry and calculates HCT. Gem® PremierTM 4000 instrument uses co-oximetry technology, and we wanted to find out which method is more accurate and more reliable for the measurement of tHb concentration. For clinicians, concentrations of tHb are significant for decision about blood transfusion.

In this study, the analytical performance of the Gem® PremierTM 4000 was compared with the Ciba Corning 865 (Bayer Corporation, USA), Gem® PremierTM 3000 (Inc. Lexington, MA 02421, USA) and Dimension RxL (Dade Behring Inc, Newark, DE, USA) analyzers during the period of 30 days in the Rijeka Clinical Hospital Center, Rijeka, Croatia. These analyzers, except for Dimension RxL, were placed in the operating room and laboratory staff used them in their work.
Table 1 shows analytical methods of the Gem® PremierTM 4000 analyzer and comparable methods of other reference analyzers. pH, pCO2 and electrolytes were measured by potentiometry, pO2, glucose and lactate by amperometry. tHb concentrations were measured by co-oximetry and HCT was calculated (HCT% = 3.0 x tHb).
Table 1. Analytes and methods on Gem® PremierTM 4000 analyzer vs. comparative methods of other examined analyzers 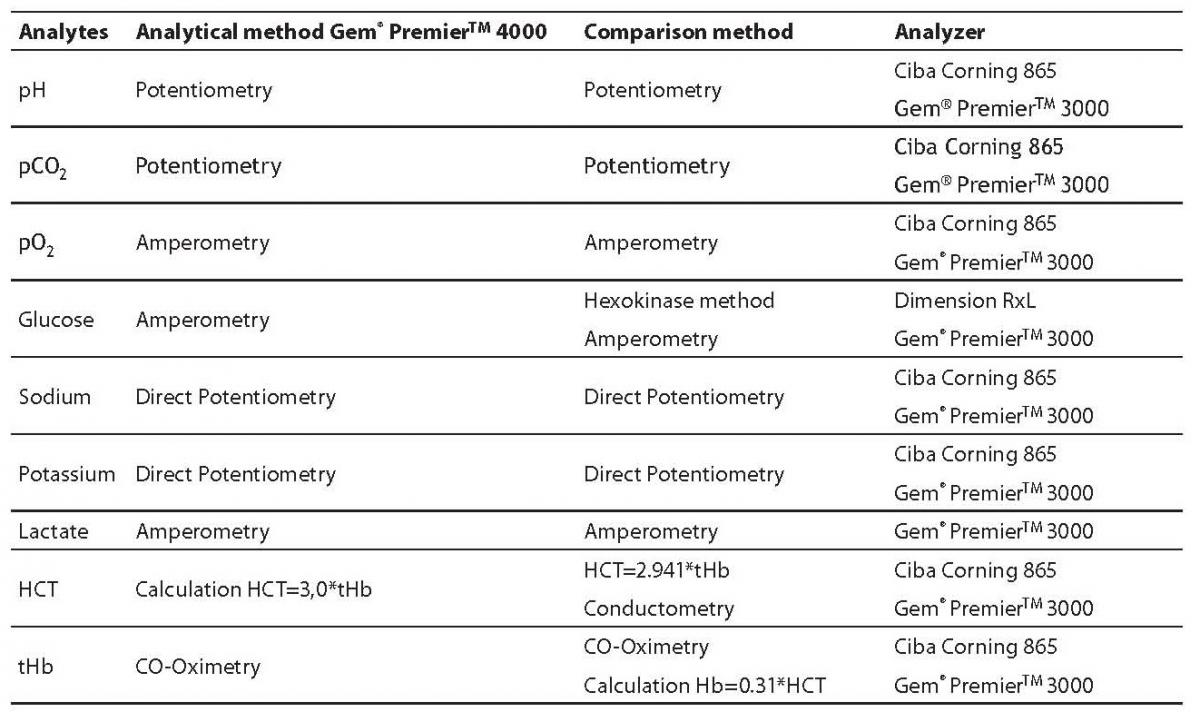 A total of 200 whole arterial blood samples were analyzed on the Gem® PremierTM 4000 analyzer and on Ciba Corning 865 and Gem® PremierTM 3000 (analytes: pH, pCO2, pO2, K, Na, glucose, tHb, HCT), as reference analyzers. In addition, 130 of those blood samples were analyzed for lactate and glucose. In the case of glucose, plasma samples (Li-heparin) were analyzed on the Dimension RxL as a reference analyzer. The blood samples that were used in the study were collected from adult patients for whom determination of pH, pCO2, pO2, electrolytes, metabolites and tHb/HCT was requested during operations so that no additional blood sampling was required. Whole blood samples were collected in Li-heparin syringes (BD Preset TM, Plymouth, U.K.) and analyzed immediately upon collection on all analyzers simultaneously. After having been injected into the Gem® PremierTM 4000, the bubble generated by the aspiration process was eliminated and the sample was injected into another analyzer. As for determinations of glucose, heparinized blood samples were centrifuged (10 min/3,500rpm) and plasma was analyzed on Dimension RxL analyzer.
Within-run imprecision was assessed by multiple (10 times) concentration determinations of pH, pCO2, pO2, electrolytes, metabolites, tHb and HCT in two different patient whole blood samples of low and high concentrations, respectively.
During the 10 days, between-day imprecision was assessed by determination of the same analyte concentration in two commercial control samples of two concentration levels (Rapid QC Complete Level 1 and Level 2, Bayer HealthCare LLC, MA,USA) once a day.

Statistical analysis was performed with MedCalc® (MedCalc 9.3.3.0, Mariakerke, Belgium). In order to determine imprecision, the arithmetical mean (X), standard deviation (SD) and coefficient of variation (CV %) were calculated. Correlation was expressed by Pearson’s correlation coefficient (r) with calculation (95%) of confidence interval (CI) for each of the investigated analytes. Passing and Bablok regression analysis (5) of results was used for the calculation.
Our acceptance criteria were: CV < 5% for imprecision, correlation coefficient r > 0.95 for assessment of the level of correlation of results. 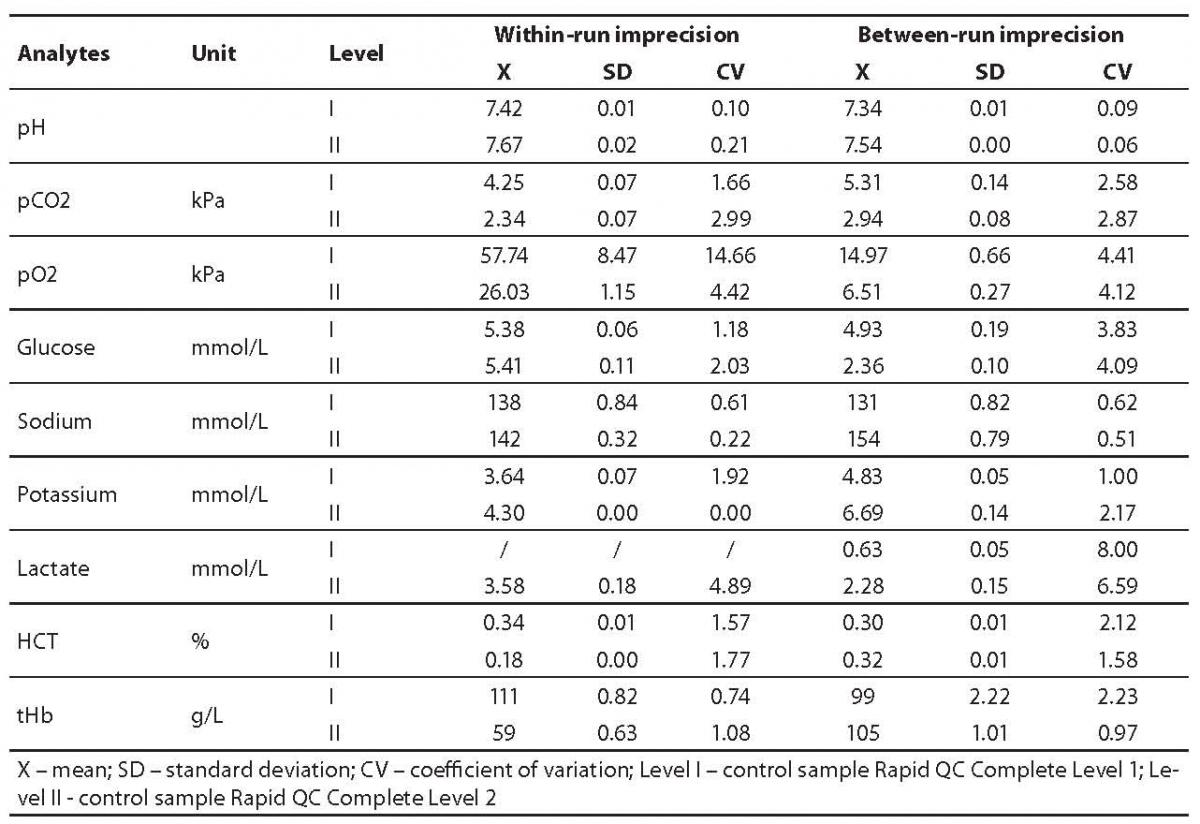 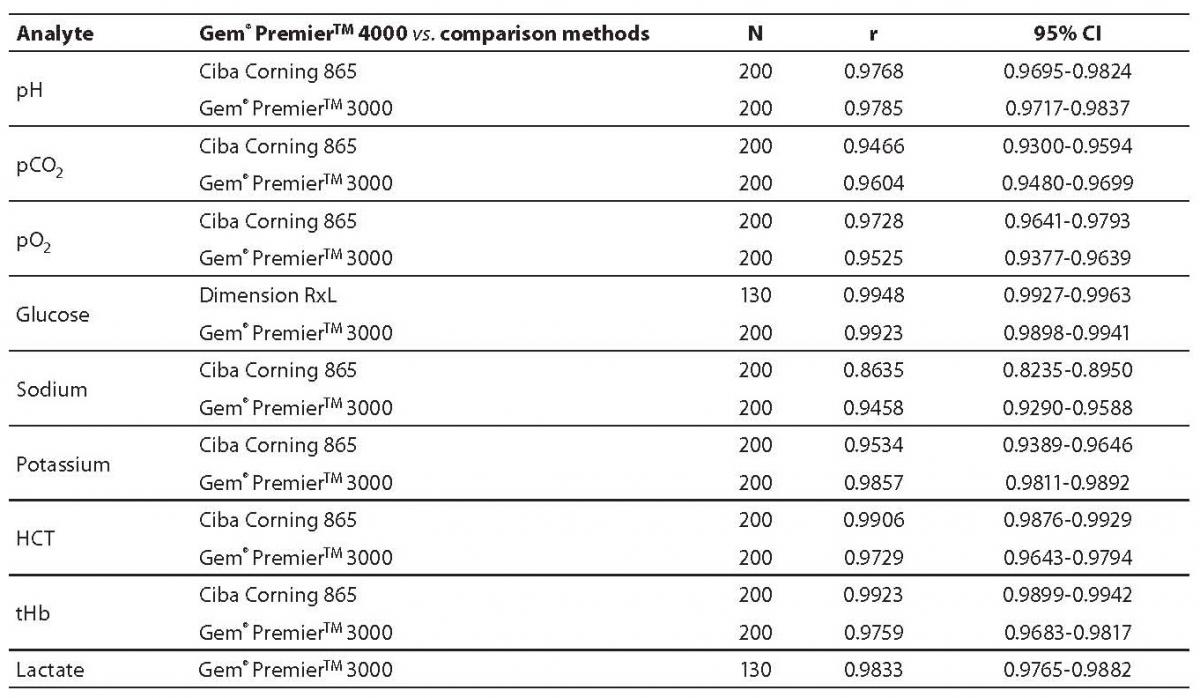 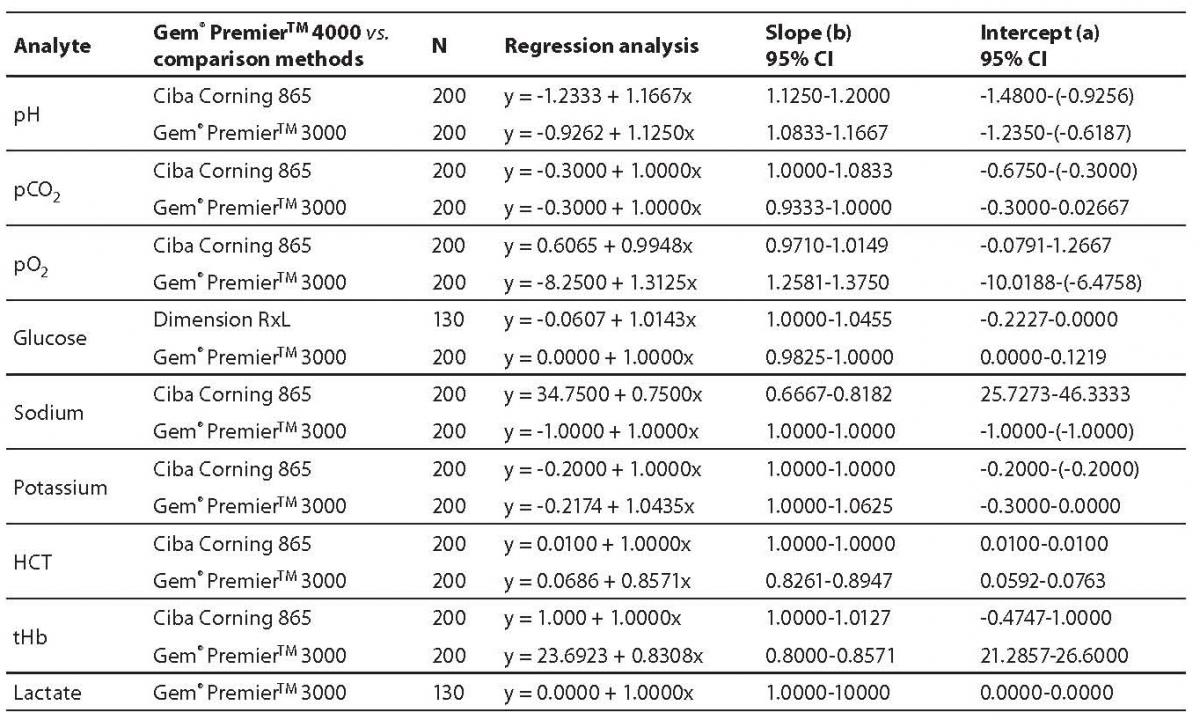 We are grateful to Ventus-Medical d.o.o., Zagreb, for the provision of instruments and reagents for the analytical evaluation of the Gem® PremierTM 4000 analyzer.