Paraoxonase 1 activity and phenotype distribution in premenopausal and postmenopausal women

[6] Department of Medical Biochemistry and Hematology, Faculty of Pharmacy and Biochemistry, University of Zagreb, Zagreb, Croatia

A postmenopause, a physiological state in the woman life, is associated with the increased risk for cardiovascular disease (1-3). Risk factors include an atherogenic lipid profile, small increases of systolic and diastolic blood pressure and increased sympathetic tone. Furthermore, postmenopause is associated with central adiposity and increased insulin resistance (1,3). Among other, atherogenic lipid profile includes decreased or maintained level of high density lipoprotein (HDL) (1,3,4). Also, postmenopausal women show changes in the chemical composition of HDL, increased HDL oxidability and also decreased ability of HDL to prevent low density lipoprotein (LDL) oxidation (4).
One of the enzymes on HDL which possesses antiatherogenic and antioxidant properties is paraoxonase 1 (PON1) (5,6). PON1 is synthesized in the liver, secreted in the plasma where it is mainly associated with HDL (6,7). The N-terminal hydrophobic signal peptide of PON1 is structural requirement for bounding of the enzyme on the HDL (5). The association with HDL is necessary for obtaining the optimal enzyme stability and activity (8,9). Enzyme hydrolyses different substrates by its organophosphatase, arylesterase and lactonase activity (6,10-14). It was shown that PON1 has important physiological role in lipid metabolism and prevention of atherosclerosis. It protects HDL against oxidation and preserves its function, protects LDL against oxidation and decreases lipid peroxide in atherosclerotic lesions (6). The different non-genetic factors (like smoking, alcohol consumption, diets and different physiological and pathological states) and genetic factors [polymorphism of paraoxonase 1 (pon1) gene] affect PON1 activity which show large interindividual variability (up to 40 times) (5,6,15-18). PON1 phenotype is influenced by genetic and non-genetic factors (5,15).
Zago and co-workers reported changes in concentration, composition and function of HDL in postmenopausal women (4) which could have the effect on the PON1 activity. We assume that reduced activity of antioxidant enzyme like PON1 could also contribute to the higher risk of cardiovascular events in postmenopausal women. So, we aimed to investigate difference in the lipid status, paraoxonase and arylesterase PON1 activities and PON1 phenotype between women with regular menstrual cycle and postmenopausal women.

This case-control study was conducted in Department of medical biochemistry and haematology, Faculty of Pharmacy and Biochemistry, University of Zagreb and Polyclinic Bonifarm, Zagreb. Subjects were recruited during December 2013 in Polyclinic Aviva, Zagreb and Department of Gynaecology and Obstetrics, Medical School University Hospital Sestre Milosrdnice, Zagreb, Croatia.
The study included 23 apparently healthy women with spontaneous natural menopause and with normal cervical smear. Also, 51 apparently healthy premenopausal women with regular menstrual cycle and normal cervical smear were included in the study. 25 of them were in the follicular phase of the cycle (blood was collected from 3rd-12th day of cycle) and 26 were in luteal phase of the cycle (blood was collected from 19th day of cycle). All women were examined by general practitioner and gynaecologist. Health and menstrual status (pre- and postmenopausal) was defined by the questionnaire, and self-reported during interviews with the physicians. World Health Organization definition for postmenopausal was used, it consider postmenopausal status as absence of menstruation for at least 12 months (19). Exclusion criteria were: cardiovascular, renal, liver or neoplastic disease, diabetes mellitus and diseases of reproductive organs, use of oral contraceptive levonorgestrel-releasing intrauterine systemor hormone replacement therapy, pregnant women and women with surgical-evoked menopause.
The study was approved by the Ethic Committee of Medical School University Hospital Sestre Milosrdnice, Zagreb, Croatia and Polyclinic Aviva, Zagreb, Croatia. All participants signed informed consent.

Samples were collected after 12 hour of fasting, into serum tubes with clot activator (Greiner Bio-One, Kremsmünster, Austria). After 30 minutes of resting for spontaneous clotting, samples were centrifuged at 2000 x g for 10 minutes at room temperature and sera were stored at -20 °C until further analysis.

Statistical analysis was performed using SigmaStat for Windows, version 3.0 (2003. SPSS Inc, Erkrath, Germany). Data are presented as median (interquartile range) or as counts (proportions). Age is presented as median and range (minimum and maximum). Due to the small study group we used non-parametric statistic. Quantitative data were tested using the Kruskal-Wallis Analysis of Variance on Ranks and Dunn’s method was used for Post hoc testing. Chi-square test was used for comparison of proportions. P values lower than 0.05 were considered statistically significant. 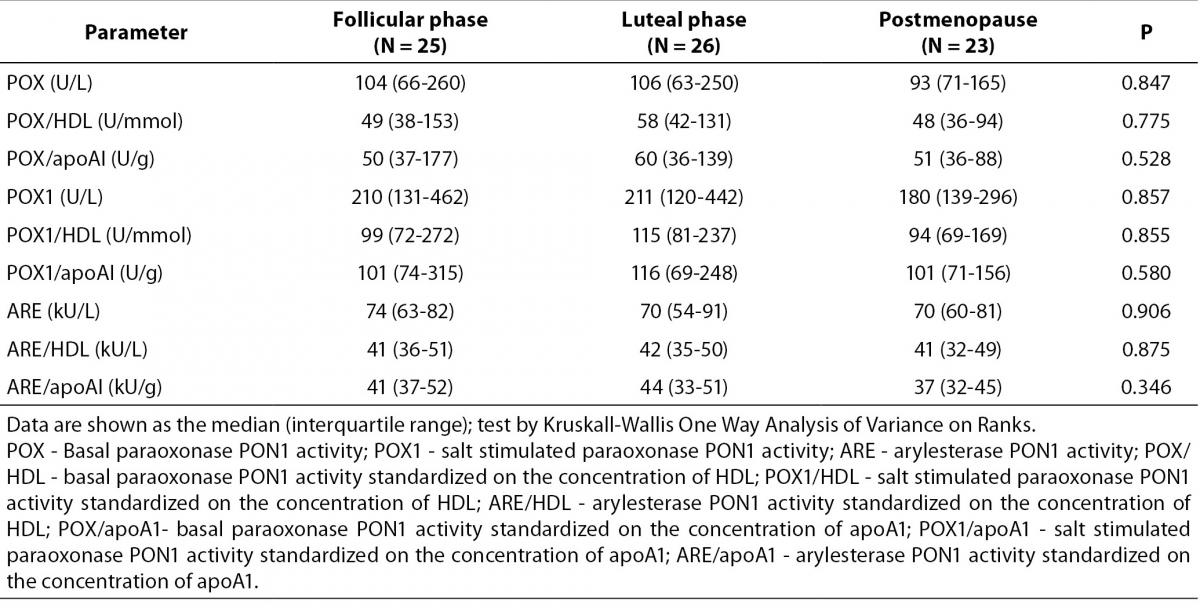