Introduction: We hypothesized that patients with stable angina have increased plasma levels of mRNA from genes responsible for atherosclerotic plaque development and destabilisation, i.e. from death-associated protein kinase (DAPK1) and monocyte chemotactic protein-1 (CCL2).
Materials and methods:Nucleic acids were isolated from plasma of patients with stabile angina and healthy subjects as controls. mRNAs were transcribed to cDNAs, quantified by real-time PCR and standardized to the amount of a reference gene. Reagents for PCR quantification are declared to be mRNA specific, but in our test conditions DNA was found to interfere in both assays.
Results: Patients had 5.1-times higher plasma level of DAPK1 nucleic acids (mRNA and DNA) than controls (P < 0.001) and the highest levels were associated with the presence of diabetes. However, plasma levels of CCL2 tended to be lower than in controls, and in statin-treated patients the decrement reached significance (-66.3%; P = 0.041).
Conclusion: The estimated levels are explicable in terms of current knowledge. Further studies with specific assays for mRNA PCR quantification are reasonable to access whether this approach offers non-invasive in vivo assessment and monitoring of gene expression profile in atherosclerotic vascular beds.

Death-associated protein kinase (encoded by DAPK1) is a proapoptotic, calmodulin-regulated serine/threonine kinase that carries a C-terminal death domain. Apoptosis has been identified as a prominent feature of atherosclerosis (1) and DAPK1 mRNA and DAPK1 are increased in carotid atherosclerotic plaques (2). Monocyte chemotactic protein-1 (encoded by CCL2) is involved in the formation, progression, and destabilization of atherosclerotic plaques (3). A follow-up study in hypercholesterolemic rabbits showed that the increase of CCL2 mRNA in arterial wall correlated with atherosclerotic plaque development (4).
Cell-free nucleic acids are nucleic acids (DNA, mRNA) present in plasma, serum and cell-free fractions of various others biological fluids (5). As to coronary artery disease, the prognostic value of nucleic acids in theplasma of patients with acute coronary syndrome has been established (6,7) and patients with coronary atherosclerosis have increased plasma cathepsin S mRNA levels (8). We proposed that it should be possible to measure DAPK1 mRNAand CCL2 mRNA levels, i.e. from genes responsible for plaque development and destabilization, in plasma of patients with coronary atherosclerosis, and we hypothesized that these levels are increased. If the answers were positive, it would mean that plasma mRNA estimation could offer non-invasive in vivo assessment and monitoring of gene expression profile in atherosclerotic vascular beds.

Peripheral blood was taken into EDTA tubes (Becton Dickinson, Plymouth, UK) after at least 12 hours of fasting and before coronary angiography. To reduce the bias resulting from instability of mRNA the same double-spin procedure was used in all subjects to obtain plasma nucleic acids. Sample processing took place within one hour of collection. Haemolysed samples were not used for analysis.
RNA was isolated from plasma usingQIAamp MinElute Virus Spin Kit (Qiagen, Hilden, Germany) according to the manufacturer’s recommendations, but with the following modifications: 1) the incubation time for proteolysis was 5 min; 2) RNA was eluted from the column with 55 μL RNase-free water and the collected eluate used for a second elution of RNA from the samecolumn. Standard methods (A260/A280 on a NanoDrop or Agilent RNA 6000 Nano kit) are inappropriate for assessment of RNA yield and quality in the collected eluate because RNA carrier that is used in the process of plasma RNA isolation yields the signal, which is too dominant relative to the signal of RNA species of interest. As a consequence, RNA amounts based on starting volume rather than RNA quantity is used in all analytical procedures. Eluted mRNA was transcribed to cDNA with SuperScript VILO cDNA Synthesis Kit (Invitrogen, Carlsbad, CA, USA). First, RNA eluate was incubated in a water bath (65 ˚C) for 5 min, then immediately placed on ice for another 5 min. The manufacturer’s protocol was followed from then on.
The following TaqMan Gene Expression Assays (Applied Biosystems, Foster City, CA, USA) were used for cDNA quantification: Hs00234489_m1 for DAPK1 (exon boundary 3-4, amplicon length 105), Hs00234140_m1 for CCL2 (exon boundary 1-2, amplicon length 101) and Endogenous Control 4326316E for cyclophilin A (PPIA). cDNA was amplified by PCR according to the manufacturer’s protocol (Roche Diagnostics, GmbH, Mannheim, Germany), using a 1.5 μL (DAPK1 and PPIA) or 3.75 μL (CCL2) of the cDNA solution and the kit components in a reaction volume of 25 μL. Although the assay kits for cDNA quantification are declared to be mRNA specific, in our test conditions DNA was found to interfere in both assays. All reactions were run in triplicate and the average threshold cycle of triplicates (Ct) calculated. Between-run imprecision for the whole analytical procedure (from isolation to quantification), expressed as coefficient of variation of Ct, was less than 2%. To exclude the possibility of external nucleic acids contamination negative control (blank) was analysed in each PCR run. For clinical evaluation, the amount of each investigated transcript was standardized to the amount of a reference gene. PPIA was chosen as the most appropriate reference gene among 11 candidates available on TaqMan Human Endogenous Control Plate (Applied Biosystems), based on the smallest geometric Ct of individual candidates and results from geNorm, as in detail described previously (9). 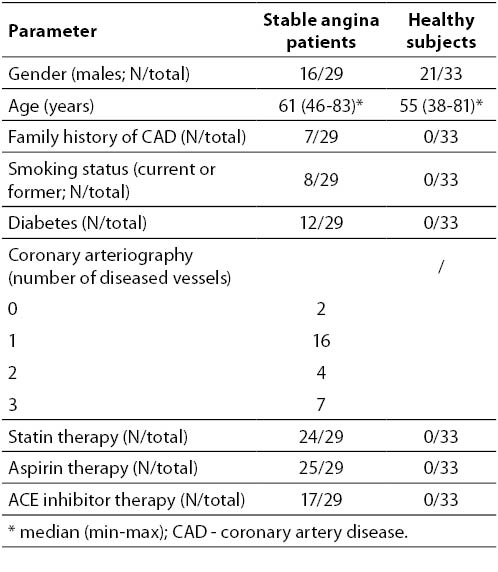 Figure 1. Plasma DAPK1 and CCL2 nucleic acids levels in patients with stable angina (N = 29) and in healthy subjects (N = 33). Plasma levels were standardized to the amount of reference gene (PPIA mRNA). Box plots demonstrate interquartile range (25th and 75th percentiles), and line inside the box denotes the median bar. The whiskers demonstrate the largest and the smallest values inside the 1.5 times interquartile range. Outliers (·) are the values between the 1.5 and the 3 times interquartile range. Extreme values are not presented.
Levels of nucleic acids in patients’ plasma did not correlate with the number of diseased coronary arteries or with any other observed parameter. In the controls, plasma levels of nucleic acids correlated neither with plasma lipids nor with any other observed parameter. Importantly, plasma levels of nucleic acids did not correlate with leukocyte or platelet counts.

Our study shows the existence of cell-free nucleic acids from DAPK1 and CCL2, i.e. from genes responsible for atherosclerotic plaque development and destabilization, in plasma of patients with coronary atherosclerosis. Plasma nucleic acids analysis is an emerging field for non-invasive in vivo assessment and monitoring of pathologic processes in tissues of their origin. It represents an alternative or a supplement to protein analysis. Nowadays, quantitative and qualitative analysis of cell-free nucleic acids is considered to be clinically useful in non-invasive prenatal diagnosis,and in diagnosis and monitoring of numerous cancers (5), but novel applications are emerging also in other critical care settings, such as acute coronary syndrome (6–8,11). These nucleic acids can be measured precisely in only 200 mL of plasma of patients with stable angina as well as of healthy subjects (8,11). We believe that with the use of higher plasma volumes for nucleic acids isolation (commercial kits are available) and with further improvement of specificity of assays for PCR quantification there will be possible to reliably measure plasma mRNA from DAPK1 and CCL2, thus offering a new technique for non-invasive in vivo assessment and monitoring of gene expression profile in vascular beds.
Although conclusions are not as expected and DNA interference introduces uncertainty to the data, the results of our study are interesting and explicable in the light of current knowledge. High plasma levels of DAPK1 nucleic acids in patients with stable angina are consistent with the current evidence that apoptosis is a prominent feature of atherosclerotic plaque, especially in regions with a high density of macrophages (1,12). Apoptosis is an important source of nucleic acids (mRNA and DNA) in plasma (5). Furthermore, DAPK1 is a well known positive mediator of apoptosis in a wide array of apoptotic systems (13) and DABK1 was found to be highly expressed in carotid atherosclerotic plaques (2). Finally, prolonged hyperglycaemia and/or impaired insulin signalling were also shown to induce apoptosis (14). In this respect it should be noted that our study design does not exclude other sources of DAPK1 nucleic acids. DAPK1 nucleic acids containing apoptotic bodies in non-vascular tissues may escape the elimination by reticuloendothelial system in those tissues and thus protrude into the blood. This could be an additional reason for extremely high plasma DAPK1 nucleic acids levels in our patients with diabetes. Unexpectedly, stable angina patients had lower plasma levels of CCL2 nucleic acids than controls. Here it is noteworthy that if DNA had had a major contribution to the signals obtained, it would have been difficult to explain the divergent results for plasma nucleic acids levels from CCL2 and DAPK1. Lower plasma nucleic acids levels from CCL2 in patients with stable angina could be explained as a consequence of statin pleiotropy (15). Twenty-four patients (out of the 29) were receiving statin therapy. Statin- treated patients had lower plasma concentrations of CCL2 than those without statin therapy (16), and statin treatment significantly diminished neointimal and medial CCL2 in a rabbit model of atherosclerosis (17). Finally, statin treatment reduced CCL2 mRNA levels in peripheral blood monocytes in vivo (18).
To conclude, cell-free nucleic acids from genes responsible for atherosclerotic plaque development and destabilization are possible to quantify in plasma of patients with stable angina and of healthy subjects and the estimated levels are explicable in terms of current knowledge. Further studies with specific assays for PCR quantification are reasonable.

The authors acknowledge financial support from the Slovenian Research Agency (project No. L3-0129-2413-08).